1822 Crowle Enclosure Award William Ducker awarded the plot of land, numbered 207, on Godknow Common. It would appear that they built a property on this land and used the land as a garden. Sometime before 1841 they built another house on part of the property they were using as a garden.  It appears that the Drinkalls were already living in the property as the […] 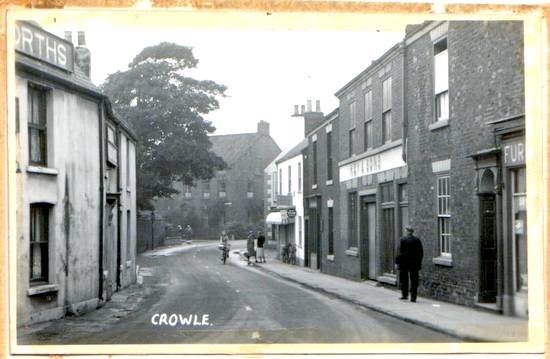 Chafor’s hardware shop is a Crowle institution. The shop is like an Alladin’s cavern of useful items that are hard to find elsewhere and if they haven’t got what you are looking for they’ll do their best to get it for you. In this day of internet shopping, it is a breath of fresh air. Although the Chafor family have only been running the shop […]

The temperance hall was located on Fieldside and was demolished in 1984. A bungalow, called Melody Lodge now stands on its site. The deeds of the building that are now included with those of Melody Lodge provide some of its history. In 1833 the trustees of the of the Wesleyan Sunday School acquired the copyhold property on Fieldside from Thomas Pettinger and his wife for the sum of […]

Hirst priory is located two miles south of Crowle, owever strictly it is located in teh Parish of Belton. Nigel d Albini (Father of Roger de Mowbray) granted the site of Hirst Priory to the Augustinian Canons of St Oswald at Nostell Priory sometime prior to 1539. This was added to by his son Roger de Mowbray who doubled the food rents. The canon in […]

The land on which the cinema is built is shown to be a blacksmith’s yard on the 1911 Tax Map. Th ‘undeveloped site can be seen on the left-hand side of this postcard from early in the 20th century. The Regal Cinema was built by Joseph Spivey to replace ‘The Picture House’ in the Market Hall. It was constructed by the local firm of A Kelsey […]

After restoration in 2014.   The listing for the building describes it as being built in the early to mid 19th century and it was described by Pevsner as a very unusual survival. It appears to have been bought by Thomas Lightfoot in 1826, and in his admission to the Manor of Crowle, the property was described as Yard, Saddler’s shop outbuildings and appurtenances near market […]