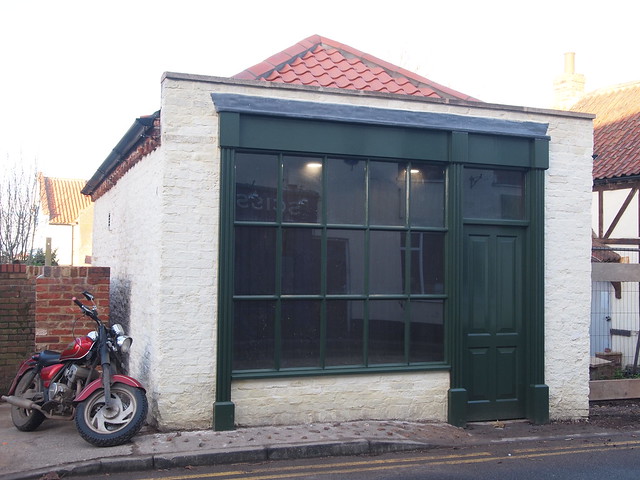 The listing for the building describes it as being built in the early to mid 19th century and it was described by Pevsner as a very unusual survival.

It appears to have been bought by Thomas Lightfoot in 1826, and in his admission to the Manor of Crowle, the property was described as Yard, Saddler’s shop outbuildings and appurtenances near market place now in the occupation of of William Moody.

It was acquired by Anderson Hind, a local farmer who lived in the Thithe house on Vicar’s Walk, in 1859.
After Anderson’s death, it was sold in 1885 to Samuel Cornelius Brunyee, who lived at Sand Hall and owned the Cross Keys Hotel for £225. At that time it was occupied by William Armitage and in the 1891 Census he is described as being a greengrocer.

In the 1911 Property Tax Survey the property was described as a Brick & Tile Shop. 1 storey. Greengrocers. The house had 2 rooms and a kitchen with 3 rooms upstairs. The buildings are described as old and in bad order. Small yard. No Garden, Small greenhouse. Coals & Closet. Rent Low.
The property was owned by S C Brunyee’s trust and the occupier was Thomas Jennings – in the 1911 Census he is described as a Market Gardener so that is consistent with running a greengrocers.

The shop remained in use as a greengrocers to 1990’s (?) and many people still remember the shop when it was run by Mr and Mrs Horry.