The Baptist community within Crowle is reputed to date back to 1599, making it one of the oldest Baptist congregations in the country.

The current Chapel and attached school room were constructed in 1879 on the site of an earlier chapel, dating to the 1820s. This rebuilding coincided with the peak in Crowle’s prosperity. The building remained unaltered in footprint until some point after the 1907 OS map, when an extension was added to the rear of the schoolroom. The chapel was closed as a place of worship and has stood empty since 2010.

The building is quoined to the accessible corners, and rendered to the south and east, street-facing elevations. Both the chapel to the west and school room to the east are single storey and sit beneath a dual pitched, gabled roof with renewed tiles. Their main elevations are mirrored, with a central, round-headed entrance flanked by tall, round-headed windows to each section. Glazing is mostly original, with stained glass side-light borders. Both gable ends have roundel painted plaques, however only that to the Chapel remains legible and reads,

Doors are original under fan-lights.

The west elevation has two round-headed windows with original multi-paned sashes. The north, rear elevation is largely plain, with windows confined to the extension and the skylight to the altar table platform. The east elevation was not visible externally, however it has one central window matching those to the west elevation.

The sanctuary has an internal porch with wood plank doors and access to painted pews on either side. Plain wood pews line either side of the space, with painted numbers to the ends.
The central lectern is on a raised platform, flanked by steps to either side with turned mahogany newels and handrail, with cast iron painted splat balusters. In front of this is the full immersion baptistery, covered by a wooden platform. It is lined with modern tiles. The lectern table space has a shallow shelf and is lit by a renewed skylight. The space has retained its wainscoting and cornice, but there is evidence of a removed ceiling rose and light. There is an internal window matching those to the east and west overlooking the adjacent school room, which is accessed via a large, wood panelled sliding division.

The school room space is entirely open plan, with a modern fireplace to the south east. Coat hooks line the north wall, where there is a multi-paned square-headed internal sash window which would have originally been external. The extension to the rear houses the kitchen, toilets and storage area; this is accessed via a four-panel door.

The plot is mostly surrounded by a brick boundary wall, with stone capping and gate piers to Mill Road. There is a wrought-iron fence and gate which divides off the burial ground.
Gravestones are set into the ground in front of the chapel entrance, while the remainder are within the separated burial ground. These are a mixture of uprights and chest tombs and include a number relating to the Hinds, a locally prominent milling and farming family. 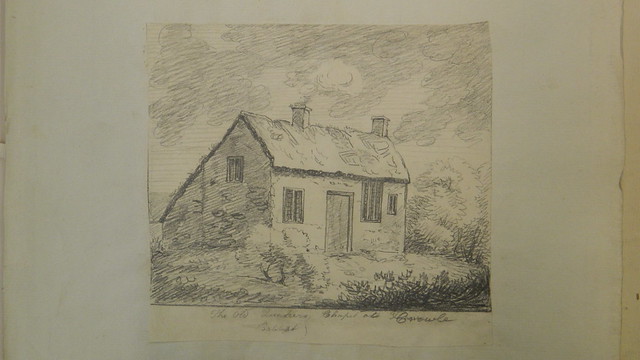 A drawing showing the earlier chapel building built in 1820.

One thought on “Baptist Church”