There was a Quaker burial ground just off Brewery Road.

Its location is shown on the 1738 manorial plan. It would appear that it dates to 1697 when Thomas Wrestle of Winteringham surrended a plot of land, 20 yards square, to Thomas Wrestle, Junior, of Belton, Joseph Berrier and Robert Coakes for a Quaker burial ground. This had been a piece of common pasture and had right of way through the lands of William Dunham.

In 1735 John Berrier, Abraham Morrice, Abraham Davies and John Harland were admitted to the manor as Trustees of the burial ground.

In 1765 George Staniland was admitted to the manor, as messenger of Mary, the wife of Samuel Smith, and Ann the wife of George Staniland (Mary and Ann, being the only children and coheirs of Abraham Davies, late deceased,the only survivor of the trustees for the ground).

In 1766 Robert Coakes, John Seaton, Richard Taylor, John Read, Robert Berrier and Thomas Read were admitted to the manner in respect of the burial ground.

By 1849 the burial ground had been out of use for some time. William Casson, of Thorne, a Quaker, had been contacted by a person from Crowle complaining about the state of the burying ground. Trees were being chopped down and a number of bones had been collected by a girl who was going to sell them for tillage. Mr Casson wrote letters to Richard Thompson as, by then, there were no Quakers in Crowle and the nearest group were in Gainsborough.

More information about William Casson, of Thorne, can be found here – http://historyofthorne.com/publications/pdf/william-casson.pdf 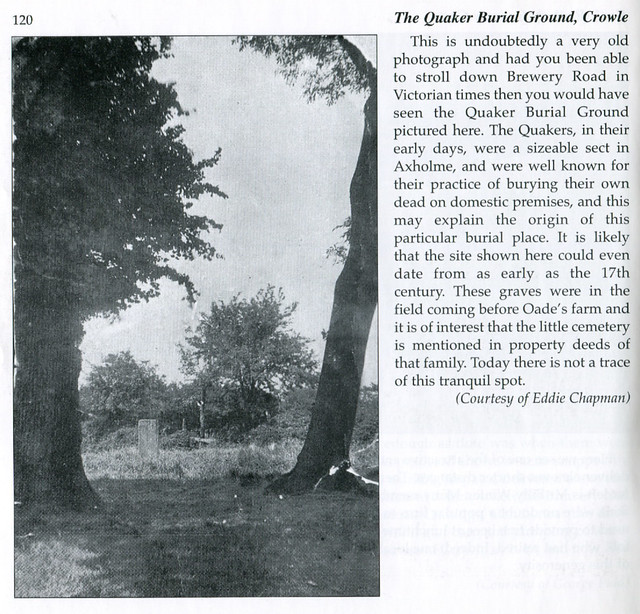