Until 1862 the Highways within Crowle Parish were maintained by the Vestry Committee. The Highways Act 1835 had given the committee the authority to collect a rate to maintain and keep the local roads in order. A surveyor was appointed by the committee to be responsible for this.

The Highways Act 1862 enabled Justices of the Peace of a county to divide the county into Highway Districts consisting of a number of parishes.  The governing authority was normally known as a Highways Board and in October 1864 the overseers of several parishes in the Isle of Axholme received notification from the Clerk of the peace for Lindsey of the proposal to constitute a Highways Board. Despite opposition to the formation of the board, because of the perceived administrative cost, the first meeting was held at the Police Station in Epworth on the 25th March 1866.

Crowle, however, was not part of this Highways Board, as it had formed a Local Board in 1865 under the Local Government Act of 1858. The formation of the Local Board was not without controversy as ratepayers in Eastoft opposed its formation and an inquiry had to be held.

The Public Health Act 1875  redesignated all local board districts as urban sanitary districts and this name remained until 1894 when the Local Government Act passed all the powers, duties and liabilities of existing local boards, highway boards, highway authorities or surveyors to the newly created Urban District and Rural District councils. 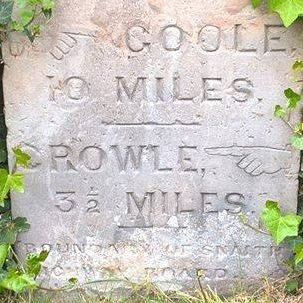 This milestone was erected by the Snaith Highways Board at their boundary in Eastoft – I am not aware of any similar stones being erected by either the Crowle Local Board or the Isle of Axholme Highways Board.