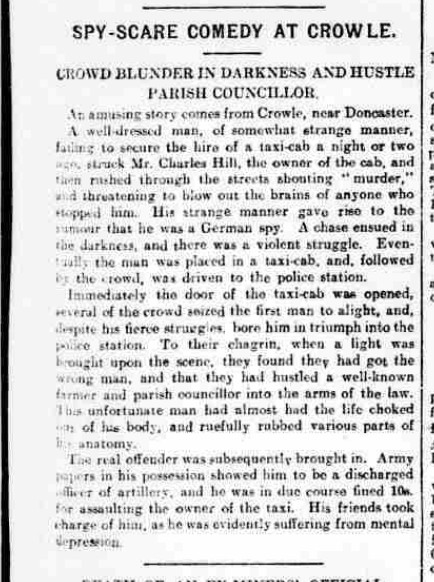 An amusing story from Crowle, near Doncaster.

A well dressed man of somewhat strange manner failing to secure the hire of a taxi-cab a night or two ago struck Mr Charles Hill, the owner of the cab and then rushed through the streets shouting “murder” and threatening to blow out the brains of anyone who stopped him. His strange manner gave rise to the rumour that he was a German spy. A chase ensued in the darkness and there was a violent struggle. Eventually the man was placed in a taxi-cab, and, followed by the crowd, was driven to the police station.

Immediately the door of the taxi-cab was opened several of the crowd seized the forst man to alight, and, despite his fierce struggles bore him in triumph into the police station. To their chagrin, when a light was brought upon the scene, they found they had got the wrong man, and that they had hustled a well known farmer and parish councillor into the arms of the law. This unfortunate man had almost had the life choked out of his body, and ruefully rubbed various parts of his anatomy.

The real offender was subsequently brought in, Army papers in his possession showed him to be a discharged officer of the artillery, and he was in due course fined 10s. For assaulting the owner of the taxi. His friends took charge of him, as he was evidently suffering from mental depression.