The bounder of the whole Lordship of Croule

Extracted from the survey taken for the Citizens of London then owners of the Lordship, Michaelmas 1629

The bounder of the whole Lordship of Croule

Beginning at Durtness Wash and down Callen Dyke to the Ellers in Star Car, From the Ellers in Star Car to the Hurst Sike, From the Hurst Sike to the Monk Stone, & so to the Cross in the Ellers, From the Cross in the Ellers to the Cross of the Moors. From the Cross of the Moors to Middle Moor Dyke, and down Middle Moor Dyke to Prescho Dyke Head and so along the River of Trent to old Dunn Head, and so down old Dunn to Nutt Hill & from Nutt Hill to Curf Hill gap, and from Curf Hill gap up old Dunn to the Tack and between Bouthe Hill and Barfoote, to Coy Garth, and from thence up Coy Garth Sike, to the edge of the Englishe  Moor, and so Linially to the Willow in the Hope, and from thence to Dunn Stathe, and from thence to Lax garth, and so to Ducklin Lodge, and thence to Swallow Lodge Hill, and thence to Durtness Wathe where we began. 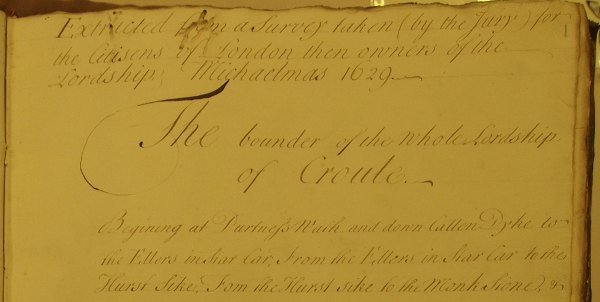 Bounders of the Manor of Crowle 1629