By angus
Many of us pass  over Keadby Bridge on our way to and from Scunthorpe. This year marks the centenary of its opening.
The bridge over the River Trent, more correctly called the George V Bridge was opened on May 21st 1916.
The Lincolnshire Echo reported that the first passenger train left Althorpe Station at 10:35 am and was driven over the new bridge by Herbert Duke, of Whitewood Cottage, Milton Road Mexborough. He was accompanied on the engine by Mr Joshua Slowan of Green Gate House, Barnetby, who drove the first passenger train over the old bridge in 1853. 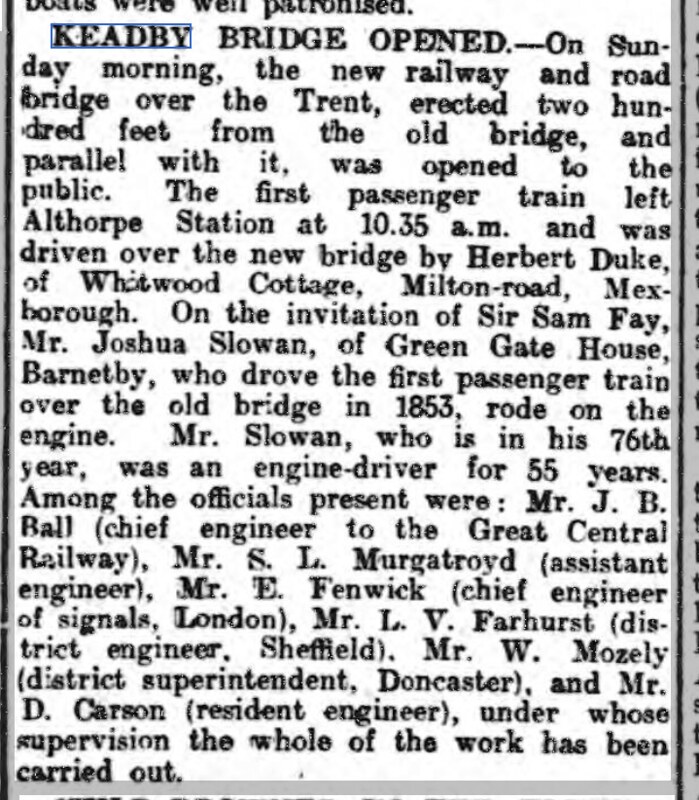 ​Monday 22 May 1916 ,  Lincolnshire Echo
The first railway bridge to cross the Trent was opened in 1864 (despite the date given in the news item above!). It had been erected by Messrs. Fairburns of Leeds under the direction of the South Yorkshire Railway. This bridge was a swing bridge and was located just upstream of the current bridge. Although demolished a few years after the new bridge was built it is still possible to see remains of the bridge abutments on either side of the railway.

A picture of the original bridge at Keadby taken looking downstream from the eastern bank. The windmill in Gunness was demolished when the new bridge was built. 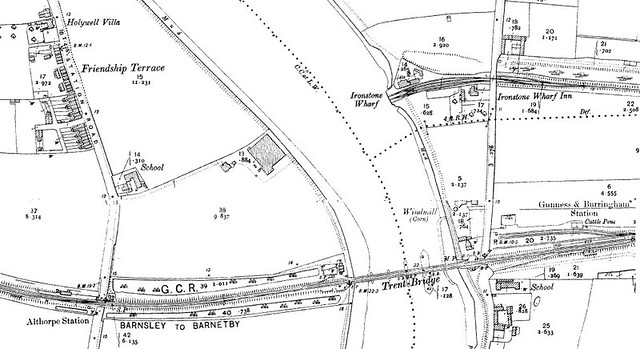 Original bridge – the original Althorpe Station was located to the west of what is now the A18. Gunness & Burringham Station to the East of the Trent.

In 1912 the contract to build the bridge was Sir William Arrol & Co of Glasgow, whilst the Scherzer Lift Rolling Bridge Company of Chicago acted as consulting engineers for the lifting span. Contractors, Logan & Hemingway built the river piers and approach earthworks.  The whole work was to be carried out under the direction of J. B. Ball engineer-in-chief of the Great Central Railway. Building work was expected to last two years.
In June 1915 the Hull Daily Mail reported that the fixed spans of the bridge were already in place and had been painted and had a graceful appearance, resting on their stone piers. Good progress was being made on the opening span, or leaf. It was being erected ‘over-end’ which was necessary to  allow river traffic to pass unimpeded. It was reported that the structure would form a distinct landmark on the landscape as it would reach a height of 60 feet before being competed. It was also expected that the bridge would be complete by September. 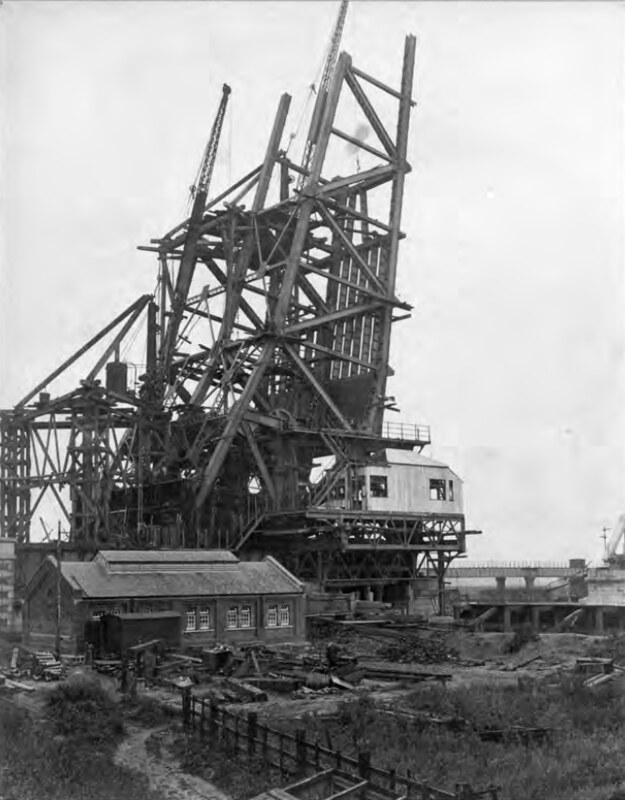 ​A picture of the opening section of Keadby Bridge under construction. The old bridge can be seen in the background.

In September 1915 the Hull Daily Mail reported that construction of the bridge approaches and Althorpe Railway Station were all finished and that all that remained to be competed was the lifting span. The completion date was then given as Mid November.
The bridge was finally opened Sunday May the 21st as reported at the beginning of the article. 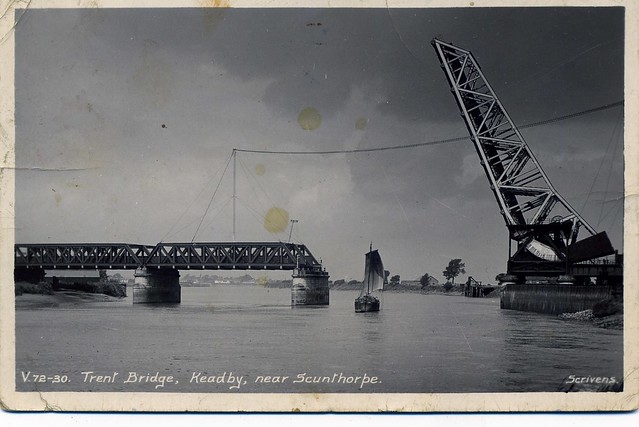 The completed bridge looking down stream.
Specification of the New Keadby Bridge.
The lifting span, or bascule, of the is 163ft and is a Scherzer rolling lift bridge. When built it was the largest and heaviest lifting bridge in Europe. There are two fixed spans of 134ft and 140ft on the west side of the river – each span composed of three lattice steel girders, the middle one which runs between the road and railway. The total distance between abutments is 548ft.
The lifting section was raised by means of electric motors operated from a control room mounted on the bridge itself. As there was no mains power when built the bridge was originally powered by storage batteries charged by petrol driven generators. 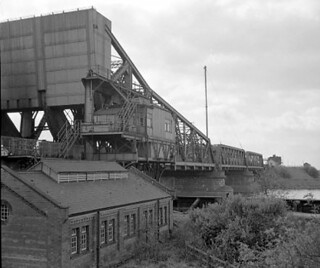 View of the King George V Bridge. The generator house can be seen in the foreground and the bridge control room on the bridge itself.

The bridge was raised for the last time in 1957 and it was in 1960 that the bridge was fixed shut and the pedestrian walkway was mounted on the outside so that road could be widened.