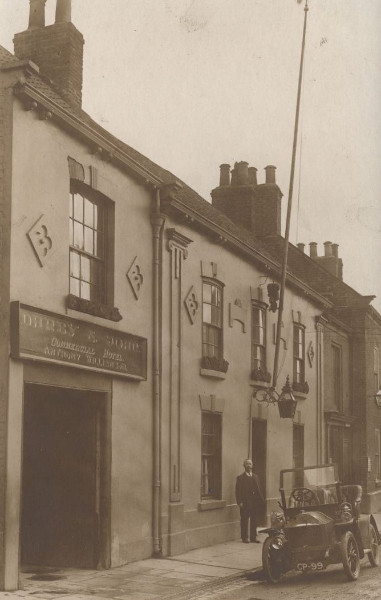 Closed – A Bungalow called Darby Place is built on this location.

The 1738 Manorial Plan and survey shows a maltkiln almost on the site of the Darby & Joan. This would imply that the site had been used for brewing from at least then. The sales particulars in 1861 specifically mention a brewhouse. However by 1884 when the pub was valued for Auction there is no mention of a brewhouse.

CROWLE.
Very valuable INN PREMISES and GRASS LAND.
To be SOLD or LET (in consequence of the Owner and Occupier being about to leave the neighbourhood), ALL that old-established, well and substantially built, very, commodious, and good accustomed INN or Public-house, known by the sign of the Darby and Joan, with the Garden, spacious Yard, Brewhouse, Stabling, Barn, and Out-buildings thereto adjoining and belonging, situate in the principal thoroughfare and central part of the Town of Crowle, in the county of Lincoln; also all that Close of excellent Grass LAND, near to the said Inn, containing IA. IR. HP. (more or less.)
The above Property is Copyhold of the Manor of Crowle; and the Court Baron and Court Leet of the Right Honourable Earl Manvers are held at the above Inn, which Courts have been held at the said Inn twice in each year (at Mayday and Michaelmas) from time immemorial; the Rent day, also, of the said Earl Manvers, as well as the Odd Fellows’ Club, are held at the said Inn, and which would undoubtedly remain with and be a benefit to the purchaser or tenant. A Weekly Market for the Sale of Pigs is also held in the Yard belonging to the said Inn, which has already and will hereafter much enhance the value of the property. The Inn is now in a good and tenantable state of repair, and the premises being spacious and centrally situate (the Stabling being capable accommodating 25 horses), and the Land being of the best description, presents most advantageous opportunity to Brewers, Spirit Merchants, and others for investment
There is sufficient room on the premises the errection of a large Brewery, which is greatly required the neighbourhood of Crowle.
For price and further particulars apply to Mr John Vause, junior, the owner, Crowle on any day in Thorne or on a Monday at Crowle, on on a Saturday in Scot-lane, Doncasterm at the Offices of
Messrs BECKITT and PHILLIPS, Solicitors
Thorne, November 26, 1861

The pub was used for auctions and Manorial Courts.