The penultimate extension to the South Yorkshire Railway to be completed before the lease to the Manchester Sheffield and Lincolnshire Rly (MS&L) was taken in hand in 1858. This was the continuation of the Thorne line to Keadby, a distance of ten miles and, as in the case of the Thorne line, it was single track and constructed alongside the company’s Keadby Canal without an authorising act.

It was estimated to cost £30,000 and the work began at Thorne on 2nd December, Thomas Waring being the contractor. Bartholemew reported its completion on 11th June 1859, and after improvements arising from a tour by the Board had been completed and the Government Inspector had given his assent, the line was opened in September.

The Sheffield Independent reported that the first train was due to depart Keadby on the 13th September 1859 at 7:40am to reach Crowle at 7:50 and onto Thorne at 8:10, 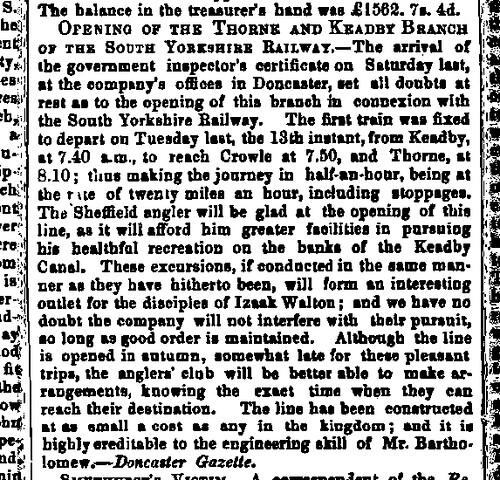 Thorne Lock, one of the two original terminals of the Thorne line, was replaced by a new station at the end of Orchard Street, a quarter of a mile nearer Keadby. Crowle was the only intermediate station when the line was opened, but others at Maud’s Bridge, Medge Hall and Godnow Bridge were brought into use soon afterwards. The initial service consisted of three mixed trains (passengers and goods) daily each way. An extra train each way on Saturdays appeared in Bradshaw’s Guide of October, in which month train staff and ticket working was introduced, a red staff being used for the Doncaster-Thorne section and a blue for the Thorne-Keadby section.

In 1866 the railway company published a bill to widen and improve the line between Thorne and Keadby. It appears that the improvements near Crowle were not completed until 1872 as it was reported that in addition to new Coal Shutes being erected at Keadby the line near Crowle Wharf was also improved. 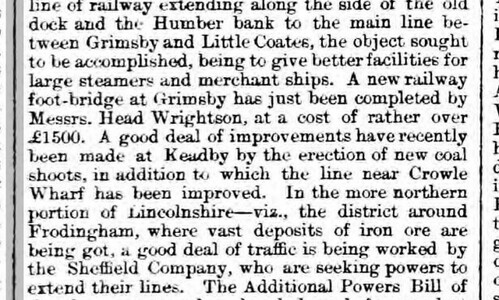