A Letter from Mr. G. Stovin to his Son concerning the Body of a Woman, and an antique Shoe, found in a Morass in the Isle of Axholme in Lincolnshire. 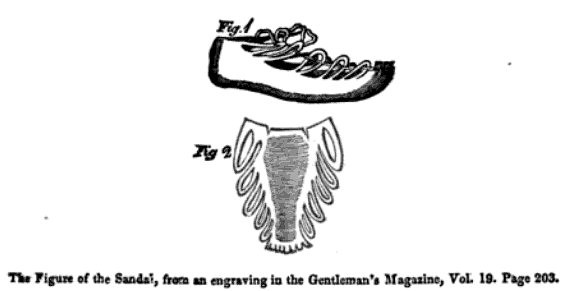 THE Beginning of June laft, a labouring Man, of Amcotts in the Isle ofAxholme, in the County of Lincoln was digging Turf or Peat in the Moors of Amcotts and, at about six Foot from the Surface, his Spade cut the Toe of a Sandal, which dropped into the pit he was graveing Peat in but also Part of the Foot dropped in, which terrified the Man, and he left it.

Hearirg of this Discovery, I went and took some Servants with me, to make further Discovery when we soon found the other Sandal (which 1 now send to you you whole and firm). It was very soft and pliable, and of a tawny Colour, with all the Bones of that Foot in it, and all the grisly Part of the Heel : And proceeding further, we found the Skin and Thigh Bones, which I measured to be eighteen Inches long. We then found all the Skin of the lower Parts of the Body, which was of the same Colour of the Sandals, and very soft, with frefh Hair upon it, which distinguished it to be a Woman, The Skin drew or stretched like a Piece of Doe-Leather, and was as strong. We then found the Skin of the Arms, which was like the Top of a Muff or Glove, when the bones were shaken out. We then found this Hand I have sent, with the Nails as fresh as any Person living. Which are now, both Hand and Nails, shrunk very much, since it was exposed to the Air : This Hand is the Lady’s natural Skin so tanned, with the Nails. Wc left the Bones in the Fingers, where the Nails are, for fear the Nails fhould drop off, if that Joint was taken out.

I want to be informed what age they wore those Sandals in. These must, I think, be very antient, and have most certainly been made of a raw Hide, by reason they, and the Skin of the Lady, were both of one Colour, and both had one Tanner; which I presume, is the Moor-Water which is exactly of the Colour of Coffee; and made so by reason of such great Quantities of Oak and Fir- Wood, that we frequently dig out of these Moors; several Oak- Trees affording 1000 Pales for fencing, five Feet and an half long, and six to eight Inches broad; which Oak- Wood is rated as black as Jet. The Fir- Wood retains its Turpeatine-Smell and in hot Weather (when it is expofcd to the Sun) the Turpentine will drop from it. This Wood is frequently riven into Laths for the Roofs of Houfes or Floors and what is remarkable, no Worm will touch them. Tiie Pales mentioned above are sold from l0 to 15 Shillings per hundred. We frequently find Hazle nuts and Fir- Apples in Abundance which I think is a plain Proof, that the Trees fell in Autumn, when the Fruits were at Maturity. I think Dr. Shuckford makes it plainly appear that the General Flood happcned in Autumn.

This Lady in all Probability was overwhelmed by some strong Eddy of Watery for she lay upon one Side bended, with her Head and Feet almost together. It appears by the Maps of the Country, that this has been the Rendezvous of all the Waters from the South, West, and North Parts of the Kingdom as for Instance, the River Dun, from Doncaster Rotherham and Sheffield which took in many more Streams; as the Idle, Trent , Torn, Dare. Rother &c. &c. Then the River Trent, which runs South to Gainsborough, then to Torkfsey, Newark Nottingham Derby, Burton upon Trent, Stafford, Trentham in Staffordjhire: And takes in a vast Number of Rivulets : Then the Oufe, which comes from near Richmond, and takes in the Ure, Wharf, Bishop’s dike Aire, Calder, and a great Number of Rivulets which are all lost in that famous Estuary the Humber.

It is also to be observed, that here is one Morass twenty Miles round, Part in Hatfield-Chace*, another ten Miles round in the same Chace, where the famous William of Lindham had his ceIL In the middle of it, where his Body was found, for eight Miles round, is all a Morafs. The Connoisseurs will give you their Opinion in the chief thing I want to know, which is, in what Age those Sandals were worn, and by what Nation : For it is not like the Scots or Irish Broges though the Scots I think, formerly inhabited but a little Way off, to wit, North of Humber. Perhaps the Danes may wear such, or the ancient Saxons for both these People must be acquainted with these Parts, as the Danes under Edgar Atheling incamped a whole Winter in this Neighbourhood, and had a Station at Gigansburgh now Gainsborough upon this River Trent. At Boxky was a famous Roman Pavement, 15 Yards fquare, the Roman Road, &c also a square Platform at Alkborough, which 1 take to be Roman though no Discoveries have as yet been made there s but at Roxby large Quantities of Roman Coins have been found.

I am your ever affectionate Father G. Stovin, P. S. As to this Water upon these Moors preserving human Bodies, it ismost certain; viz. Part of a Body taken up at Goole by your Grandfa- ther Mr. Empson 50 or 60 Years ago, and one in the great Moor near Thorn about 7 Years ago, with the Skin like tanned Leather, the Hair, Teeth, and Nails quite fresh.—— You will see the Sandal is of one Piece of Leather, and a Scam at the Heel, with a Thong of the same Leather.

It is the Skin of the Hand that is stuffed, which has suffered by the Spade,

* Mr. Catesby F. R. S. Author of the History of Carolina &c, being present, said, this Shoe or Sandal was exactly like what the Indians in Virginia wear at this Day, and call Mokasin. That ingenious Artist and skilful Antiquary Mr, Geo. Vertue communicated to me (C. M.) his Sentiments concerning this Sandal in the following Words : “When the above Letter was read at the Society of Antiquaries there was produced a Hand of the Woman therein mentioned and a Sandal or Shoe taken from one of her Feet ; it being made of Leather, tanned Ox-Hyde ; but remarkable for being cut out of one flat Piece, (fee Fig. 3,) so as to fold about the Foot and Heel ; the Form and make being so contrived without under Heel Piece, as to be fiat to tread on ; the Shape, that of a Woman’s Foot, and the Toe round-pointed. This being of an antient Form, the Society ordered an exact Draught to be taken of both that and the Hand ; which Drawings are preserved amongst others belonging to that Society. It may be observed concerning the Antiquity and Use of Leather Shoes in England that this Shoe or Sandal appears by its Form to be ancient. I conceive it was before Edward the IV’s Time, when, by Custom, piked Shoes had increased in Length, that all such who wore them in excessive Length were to be muled, or have them cut shorter, in passing in or out of the City-Gates of London. This very likely had passed amongst the better sort of People about the Kingdom for Chaucer in his Time mentions the life of long piked Shoes, so long as to be tied up by Strings or small Chains to their Knees. Thus it might have been with Mens Shoes, but not so long a Degree for Women’s Use; though observing ancient Pictures of Men and Women in Books of Illuminations, piked Shoes appear several Reigns from Ed. III. Rich. Ill, in England.