The catholic chuch dedicated to St Norbert and the blessed sacrement was built in 1872 by M. E. Hadfield & Son. 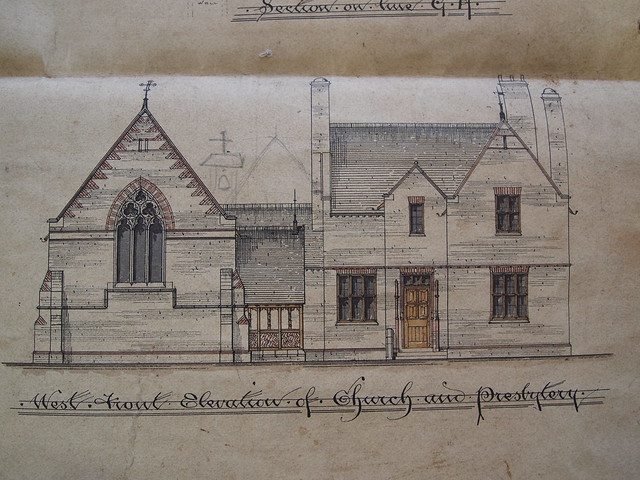 Hadfield’s drawings for the Church and Priory.

Between 1872 and 1983 there was also a Priory attached to the church. It was staffed by confreres from Tongerlo Abbey, Belgium.

(From an article in the Scunthorpe Evening Telegraph,
Special Edition, 2 November 1999. by Frank Sykes)

The dissolution of monasteries by the King with more wives than sense was a bitter blow to the Catholic community in this country, particularly so to the many priestly and religious Orders associated with Catholicism within these shores in the 16th century. It all seems rather strange that such relics and half derelict buildings such as Fountains, Rievaulx and Byland Abbeys to name but a few within striking distance in Yorkshire, receive more visitors at weekends than do the active places of worship in the present day.

Looking back into local Catholic churches and worshippers proved quite a complex task, but the book “125 years of Catholicism in Crowle”, by the former headmaster of St. Norbert’s, Alan Gidney, was more informative than my extended efforts through many parish records.

This book – an extensive survey into the historical subject — must have been time consuming, yet very gratifying. My deepest thanks to him for some of the facts I have recorded here.

Early memories from my childhood include the rivalry between the board school, located next door to the Catholic seat of learning St. Norbert’s. Sporting activities and the more competitive confrontations such as snowballing and the odd fight are more firmly remembered by myself and many other non-conformists, especially with the Methodist Church on the south side of the Catholic institution, an immediate neighbour in Crowle.

St. Norbert’s Church was until 1983 attached to the Norbertine Canons, also known as the Canons Regular of Premontre, after their motherhouse in France. Norbert was born in 1080 into a well-to-do family in Germany. He lived quite a pampered life. Out riding, he was caught in a storm like Paul on the road to Damascus, turned from the free-living life into one of service to God.

As a result of the zeal of the Order, hundreds of churches and monasteries flourished throughout Europe. In the England alone 42 such holy dwellings were erected, including Newhouse near Brocklesby (first house of the Norbertines in Britain), Barlings, Tupholme and Stixwold southeast of Lincoln, Swine, northeast of Hull; Irford and West Ravendale – both near Market Rasen, Broadholme in Saxilby, and Cammeringham south of Scunthorpe.

For three centuries after the Act of Supremacy by Henry VIII, Catholic worship in Crowle in an official capacity did not exist. Now however, after over a century and a quarter, the present buildings of St. Norbert’s have served as an integral part of the community, thanks to their founder Mr. Vaccari, an Italian immigrant to Crowle.

Irish and Italian immigrants to the area helped to popularise the faith during the industrial revolution. Some of there were here on a temporary basis only. Many others though put down their roots in the Isle of Axholme.

Vaccari who by now had anglicised his name to Walker was foreman at the newly established gas works in Crowle. His wife Hannah was English. Together they made a survey of the area and recorded 450 Catholics in the Isle.

He enlisted the help of a prominent citizen of North Lincolnshire, Mr. T.A. Young. The latter had encountered an engraving of St. Norbert, and after researches discovered his Order’s close connection to this area. Mrs. Vaccari and Young joined with a local publisher Mr. Phillips in seeking to obtain priests from a Belgian Abbey of the Order (Tongerlo), and in requesting a parish be formed at the instigation of the Bishops of Nottingham and London.

on July 27, 1871 the foundations were laid for the present buildings and house. Hadfields of Sheffield were the architects and George Sinclair the builder. Built in old English style, but without clerestory windows, and Georgian type but of red brick. The official opening was on September 3, 1872. The first priest was Rev. Fraus M. Geudens of Tongerlo Abbey, in Belgium. 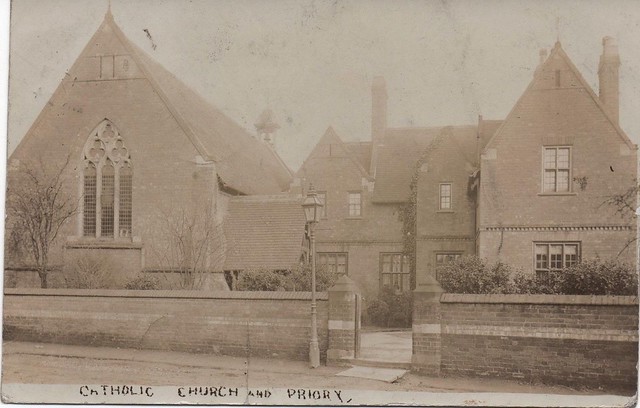 A school was opened three years later. In 1876 there was an addition to the Church of chancel and sacristy, and the house also was extended for the use of visiting student priests from the Dioceses as well as Norbertine abbeys in Europe.

Tributes have and should be paid to the long line of priests whose dedication to the cause of Catholicism in Crowle and the Isle of Axholme has been extraordinary.

The school in particular grew in numbers, soon it was obvious the overspill into the church building was not satisfactory. In 1927 a new school was built and 70 years celebration of the opening ceremony was extended to the decision to the present modern structure in 1997.

The buildings in Fieldside have a chequered history, surveillance was carried out by the police, when Irish workers were peddling Irish Sweepstakes tickets. One member who won was reluctant to claim the winnings. Stewards and the president of the club spent a night in detention at Epworth police station.

one of the first one armed bandits was installed in what became known as the Mic and Pats club. This early fruit machine was confiscated by the law.

Some embarrassment to the local church community maybe, but far was had happened internationally since.

One notable priest and the longest serving was Father Kerigan. When purchasing his first car, he had the untimely experience of seeing his rear wheel travelling ahead of his Austin A70. It was only the weight of the portly cleric that maintained the balance.

An added educational seat was the convent in Church Walk. Originally a large farm, and equally substantial dwelling house, Sister Raphael being the purchaser, a nun from a Manchester convent.

A fee-paying school was for young ladies up to 16 years old. Apart from the normal three R’s commercial courses were open for girls of any denomination. The large orchard and garden provided ample leisure space, walled on all sides, and was private in addition to pleasant surroundings.

Sisters Ursula, Margaret, Theresa and Martha to name but a few. Although the convent was run solely by nuns, they also placed a large part in the teaching staff at St. Norbert’s. A long line of sisters will be remembered by pupils past, until their departure, being in charge for almost half the existence of the school.

The interior of the church has made many changes, none moreso than the one in 1942 when Father Kerigan had a new pipe organ installed to commemorate the 800th anniversary of the first Premonstratensians coming to England.

In the late 1980s, the priest Father Stephen Canse discovered the instrument was in need of expensive repair. A former organist was Jack Taylor who died in 1988. His family gave the church its present electronic organ.

A remodelling of the altar and nave was the gift of Father McGarrity’s (a curate at the time) two sisters.

A stained glass window was erected in the memory of Father Kerigan’s parents. The ‘lady’ window and the Augustine Webster window were also bequests. The Christ the King window was the gift of Mr. And Mrs. Clarke, the grandparents of Roy Clark the television script writer.

A modern baptismal font by a former mayor of Crowle on the occasion of his election.

The Women’s Guild has always been a main feature of the church’s life and fund raising has been a financial lifeblood of the parish. One priest said: “I don’t know where I would be without my women!”

Corpus Christi processions were an annual feature parading through the town. Coach loads were imported from South Yorkshire and Scunthorpe. Alas, they, like many other forms of worship, were disbanded. But pilgrimage to the Melwood site, originally a Premonstratensian Priory, sold to the Carthusians, and home of the Shrine of the Lady of Axholme continued on an informal basis. The last truly Catholic prior there was St. Augustine Webster, one of the forty martyrs of England and Wales.

The present priest, Father Entwistle, has also contributed to the upkeep of St. Norbert’s. Like his predecessors, he has kept a watchful eye on the state of the buildings. The re-roofing was a major feature of his organising and a new heating system and decorations were installed.

The Priory has been double glazed and re-decorated. In
addition to his interest in the new school of which he is a manager.

A small sideroom was converted into a chapel often used for midweek masses. Also, a unique statue of the local saint carved by a Carthusian monk. At present, he is hoping to replace the figure of Christ on the outdoor crucifix to celebrate 150 years of the parish.

As the church looks back on its history, the many priests and nuns, the devotion of the members of the faith and the school, the holy buildings, it is hoped will be used far into the next century and beyond. From the initial idea by the Italian immigrant Vaccari, or Walker, to the present day, the history and Catholic faith in Crowle will hold its roots firmly around St. Norbert.