From – The history and topography of the Isle of Axholme LincolnshireWilliam Brocklehurst Stonehouse, 1839

FAMILY OF STOVIN
It has been handed down by tradition in this family that they came into England with the Conqueror and that the first settler was chief of the bow stringers who attended his army. To this tradition, it is evident the crest of the family refers. They were first located near Sheffield but afterwards removed to Tetley. George Stovin the seventh in descent was living at Tetley during the civil war between the King and Parliament and is stated to have confederated with the Rebels* who destroyed Sandtoft Church and to have obtained possession of the Participants lands in Epworth and Croule.
After the restoration, however, I think it extremely probable that the loyalists were determined to pay him off for an accusation was preferred against him for attending a religious service in an unlicensed place conducted by a Minister Mr Durant, who had not complied with the terms prescribed in the Act of Parliament. This is the family tradition as related to me by the present owner of Tetley. “The soldiers came in search of him twice.
The first time his wife had just lain in. One of the soldiers said “take the calf and the cow will blate.” This, however, the mother had the firmness not to do, and rather than discover the retreat of her husband she suffered them to take her eldest son. They conveyed him part of the way to Croule and then threw him into the snow, where he was found by an old servant, who brought him home. On the second visit of the soldiers which took place in the winter season, Stovin was concealed in the oak woods behind Tetley. After standing the severity of the weather for a considerable time he sought refuge in his own house, and was betrayed by an old servant. He died in Lincoln Castle in consequence of severe treatment in his conveyance thither, or from the injury which his health had experienced during his lurking in the woods. Joseph Isle, a man of property, and a native of Epworth his, fellow prisoner helped to carry him to his grave. Mr Durant preached his funeral sermon, from Job xxi, 23d verse, “One dieth in his full strength being wholly at ease and quiet. His breasts are full of milk, and his bones are moistened with marrow. And another dieth in the bitterness of his soul and never eateth with pleasure. They shall lie down alike in the dust and the worms shall cover them.” From which text the preacher would no doubt enlarge upon religious intolerance and the hardships of the prisoner’s fate; but I conjecture that he said not a word about the lawless violence of the proceedings at Sandtoft, or the share which George obtained in the spoils of the Participants lands. He married Mary Clarke of Croule, the grand daughter of Richard Brewer, for his first wife; and for his second, Ann daughter of Robert Stovin. He was one of those persons who assumed the motto Libertas et Proprietas, and who armed themselves with clubs during the troubles of the civil wars, and whose object was to resist effectually the military marauders of both parties declaring themselves neither for the King nor Parliament, but for their own liberty and property.* George, his eldest son, succeeded to the property at Tetley, but sold it to his brother James. This gentleman was High Sheriff of the County of Lincoln in the reign of George the First and in consequence of his large property and independent character possessed great influence in the Isle of Axholme. He had five active sons who inherited his property and influence.
George, the antiquary, was the oldest. He was born about 1695 and before the death of his father married an heiress of the ancient family of Empson of Goule.* This gentleman was not brought up to any profession but led the life of a country gentleman, which afforded him abundant leisure to prosecute the topographical and antiquarian researches, to which from early life he was addicted. He took great interest in the affairs of the Levels being a very assiduous Commissioner of Sewers and at the same time a Justice of the Peace. He scarcely ever left the Levels living at Croule and in its vicinity and with the true feeling of a native antiquary thinking no part of England equal to Axholme, and no town comparable to Croule. In the latter part of his life however he crossed the Trent and fixed his residence at Winterton. There he spent the concluding years of a long life living in a little cottage which he had made arcadian with honey suckles and other flowers where he was to be seen with his pipe every morning at five and was accustomed to amuse his neighbours with a variety of anecdotes with which his memory supplied him.
He died in May 1780 and was buried in the Chancel of the Church at Winterton. 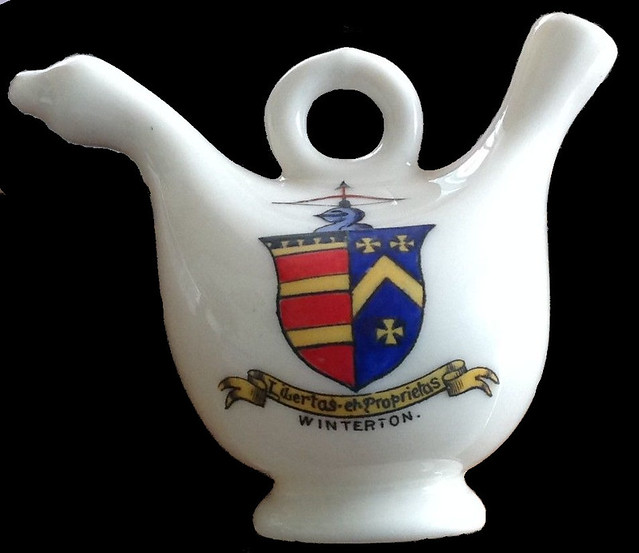 We owe to him the best account of Lindholme, from which some extracts have been already given in this work. This was printed on a single sheet together with an engraving of the Hermit’s Cell and a Poem written by Samuel Wesley, a copy of which I have not been able to procure. He also communicated to the Royal Society an account of the discovery of the body of a female in the turf moors of Amcoats, which I have narrated at length in the topography of that place. He left in manuscript many notes of Roman Roads and stations in the counties of York and Lincoln the result of personal observation. But the most important of his topographical works is a small thick quarto volume bound in rough calf consisting of transcripts of all documents which in any way he could obtain interspersed with many curious topographical notes relating to the Isle of Axholme. At the end of the manuscript are proposals for printing by subscription, in one volume folio, with marginal notes, the History of the Drainage of the Great Level of Hatfield Chase in the Counties of York, Lincoln and Nottingham, by George Stovin Esq. near forty years an acting Commissioner of Sewers in the same Levels. The price was to be a guinea in sheets. The work most probably from want of encouragement was never published.
This valuable manuscript is now in the possession of the widow of the late Rector of Rossington by whose kindness through the friendly offices of Henry Lister Maw, Esq. the author of this work has been allowed to avail himself of its contents. The only surviving son of the antiquary was the late James Stovin, Esq. who built the house at Shooter’s Hill in the parish of Rossington. From this place he removed to Whitgift where he inherited a handsome mansion and a good estate from his uncle Cornelius Stovin, the youngest brother of the antiquary.

Tetley from very remote times has been the property of the family of Stovin: for Gorge Stovin, who lived in the reign of George the First, declared that he was the eighth or ninth in descent who had possessed that property. Several residences have been erected nearly on the same spot; and at a short distance from the house, is a small burial ground containing several sepulchral memorials of the Stovin Family.

Tetley was left by George Stovin to his daughter Elizabeth, married to John Henry Maw, late of Epworth who left it to his son Henry Lister Maw. The latter built the present handsome and substantial mansion. 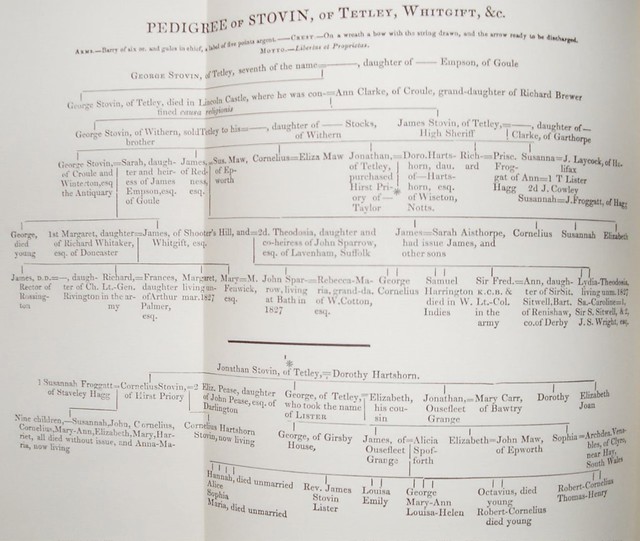