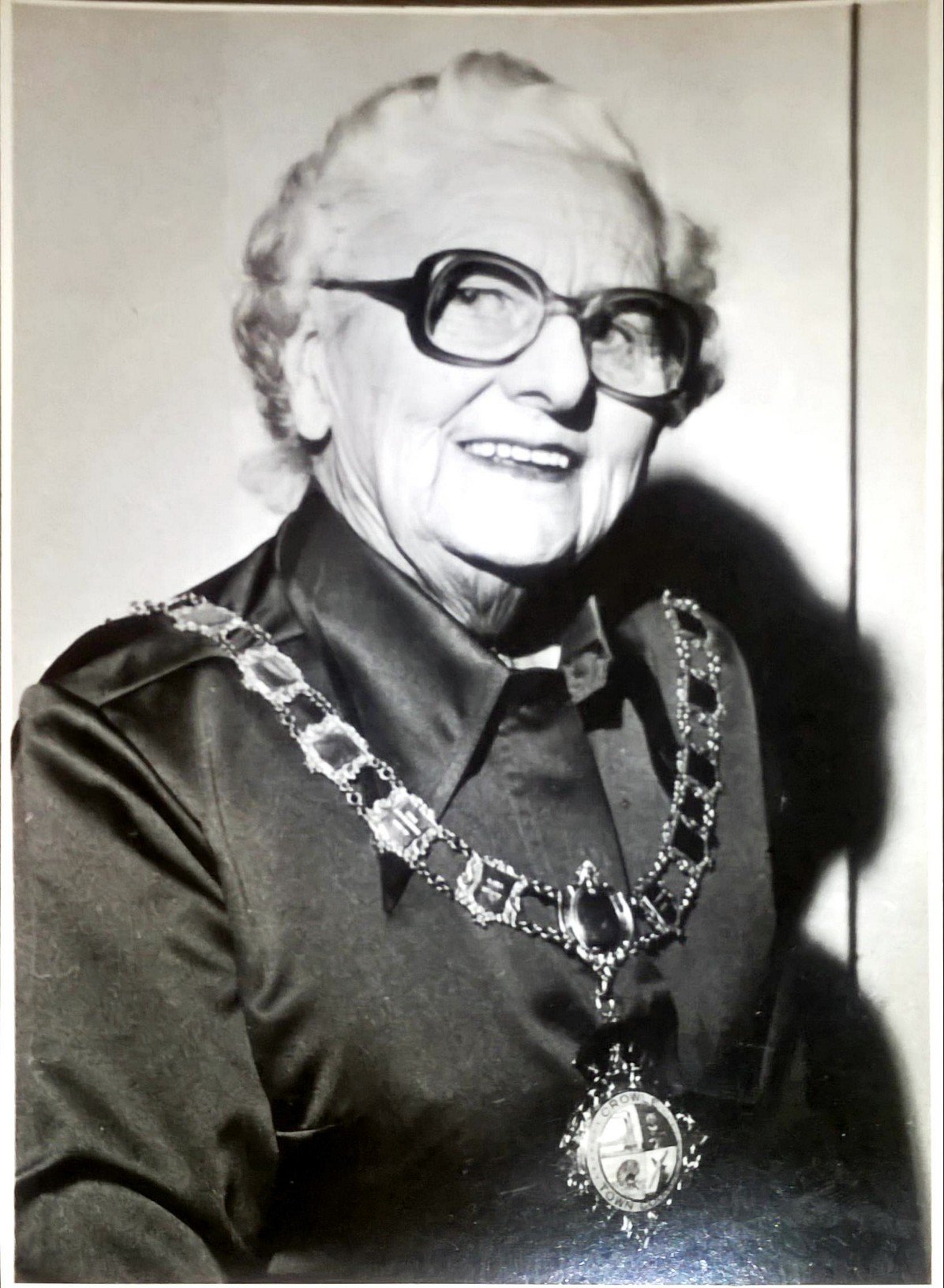 Alice Cranidge name that will live on . .

“Don’t write too much: I’m only plain Alice Cranidge, you know, and I haven’t done anything spectacular.” ONLY Alice Cranidge herself can be granted the indulgence of such devaluation, and she took the option at the end of the only formal interview the writer had ever had with her, although speaking with and meeting her thousands of times since he first saw her almost 20 years ago when a Mrs. Garland kept a little cafe in Crowle’s High Street and Miss Cranidge and a close friend could be found there over a meal.

“Plain Alice Cranidge” had on all formal occasions been Madam Mayor up to a few months ago, when she was completing a year of office as Crowle’s third Town Mayor and was proudly wearing the Chain of First Citizenship for which, single-handedly, she raised the fund to buy.

When there was already a predetermined succession for a couple of years, Miss Cranidge couldn’t very well be the first wearer without the overturning of protocol being a bit rough on someone else, but her Town Council colleagues put her in the chair (and for the second time in her service as a councillor) as soon as they could, in recognition of what she had done to provide a lasting insignia.

A cul-de-sac community of Boothferry District Council flats off the main Eastoft Road, only a few paces beyond Miss Cranidge’s little row of houses, will bear her name into posterity, no doubt — Cranidge Close, an inscription on the commemorative tablets marking the opening of both the Crowle and Epworth grouped dwellings of the former Isle of Axholme Rural District Council will presumably outlast the bricks and mortar to indicate her service to the communities of 12 Parishes for 13 years.

But all these were redundant before man fashioned any of them as reminders; the name Cranidge had been written indelibly into history when Sir Cornelius Vermuyden brought bearers of it from the Netherlands as participants in his drainage of the Isle.

“Nothing spectacular”? Maybe not. Or in the fact that a working life that extended over no fewer than 63 years has just closed at the age of 78? Maybe not, again; but that’s only Alice Cranidge’s way of looking at it.

She says what she is most proud of is the day when she saw the opening of Crowle’s purpose-built branch library, “because Alan Wise and I went for eight years in alternate months to Barton or to Brigg to get that library”. The two were Isle RDC representatives on the North Lindsey district committee, first of the Lindsey and Holland County Library, then of the transitions which
followed until Humberside County Council became the owners of one of the most up to-date rural showpieces of modern library provision.

Miss Cranidge’s pride in Crowle often leads to the assumption — a wrong one —that she must have been born there.

She wasn’t, but she was only six weeks of age when her parents took her to. Crowle from the Victoria Inn at Thorne in 1899. As it turned out, that inn birthplace on which the railway between Doncaster and Grimsby looks down only a stone’s throw distant, was appropriate, because when she began work in 1915 it was just a few miles up the line at Crowle Central Station.

From that day until the one when she left the office of William Thompson (Haulage) Ltd. at Crowle earlier this month, she had spent 63 years in transport, and in just two jobs. Forty years on the railway, 23 as personal secretary with Mr. Thompson — to whom, she recalls wryly, she went to help out for no more than six weeks.

Her recollections of railway days when the line through Crowle Wharf was still, the Great Central are a stimulating reminder of the greatness of The Steam Age. “There used to be a staff of four, normally, at Crowle Central,” she recalls, “five at busy times, but it got down to two before I left to forestall redundancy.”

At the place she still calls Crowle Wharf, she continues: “I can remember the time, after the First World War, when we were loading potatoes and the farm carts were queueing up back to Double Rivers waiting to get into the station yard. I have known my own father load as many as 40 to 50 wagons of peas in one day.

“There were a dozen or more passenger trains a day, and I have booked as many as 2,000 tickets for one train on Doncaster race-days, when the fare was Is. 3d. return.”

The tickets were of three colours — brown, blue and pink, and they included the ticket for the wagonette ride to Crowle, among them the service provided by William Harrison from Belton. Combined rail-bus tickets aren’t all that new, are they?

“There were also a lot of train trips to Cleethorpes, of course”, says Miss Cranidge, “a lot of then) kiddies’ outings. People who came into Crowle Town Station on the old Axholme Joint Railway used to walk from there to the station at Crowle Wharf to go on to Keadby.”

She served with six successive station masters, and one of the distinctions she had because of her job was that when the Crowle Wharf iron bridge replaced the old wooden one, an invitation from one of the men in charge led to her being the first person to walk across it. She remembers Mr. Dick Wroot being the last.

One skill of Miss Cranidge’s which may surprise those who have either forgotten, or are too young to know, how railway communications used to be run, was that of a Morse code expert on a telegraphy machine. Apart from a busy public life — serving as a school manager for more than 20 years (including being con-currently chairman of the County Primary School managers and vice-chairman at the North Axholme Comprehensive School), being on both the old Isle RDC and the Parish (now Town) Council, Miss Cranidge interested herself particularly in work for the Over 60’s and up to two or three years ago was organising secretary of the club she started for Crowle.

In an entirely different way, she served the community by acting as a local Press correspondent, and for many years she contributed reports of all the local activities to the Crowle. Advertiser and Epworth Bells. Now she makes news in her own right and will have the good wishes of the district as she has a better chance of avoiding over-taxing herself, as she undoubtedly did during the year she was Crowle’s first woman Town Mayor.