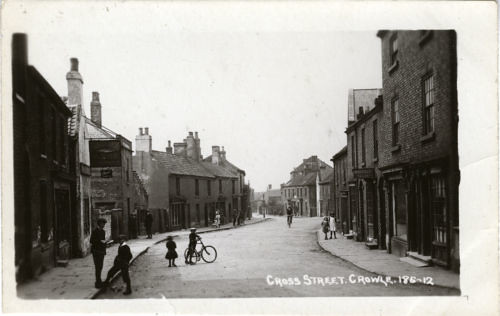 The premises on Cross Street also incorporate the town assembly rooms which were constructed in 1848. Before construction of the Roman Catholic Church Mass was said in the assembly room from time to time.

1862
Before this time, Fr. Dawson of Howden and a Fr. McNaughton of Brigg
had occasionally visited the Isle. In fact, we have a record of Fr.
McNaughton saying Mass on Easter Tuesday, April 22nd, 1862 — also
later a Fr. Harris also from Brigg. Mass then was said at the
Assembly Hall which adjoined the Crowle Fishmongers’ Arms — also used for auctions, public meetings, and no doubt for social occasions.

1877
Selling- a wife.— Ah “extraordinary occurrence took place the other
day at Crowle, Lincolnshire. William Liggott, a pork butcher, sold his
wife for £40 to Chapman Pidd, landlord of the Fishmonger’s Arms. The
articles of sale were drawn up at a solicitor’s office, the money was
paid, and the wife handed over. Both parties, it is said, appeared satisfied with their bargain. Pidd has only been a widower a few months. 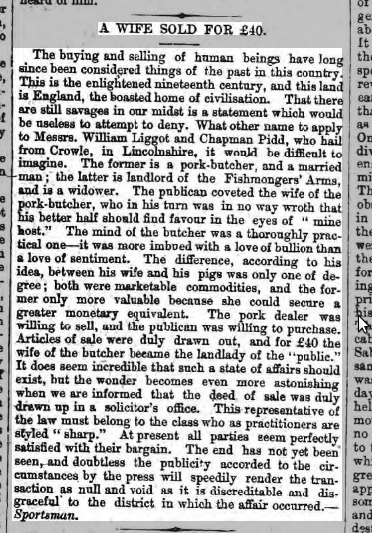 1897 Jan 2nd
FISHMONGERS’ ARMS TEA AND BALL
This annual occurrence took place on Christmas Eve, and was held in the Assembly Rooms. An excellent tea was placed on the tables by Mrs Clark, and full justice was done to it by the 90 guests who gathered around the festive board. The waiters who attended on the wants of the company were Mrs Taylor, Mrs Lockwood, Mrs Bartle, Mrs Couch, Mrs Isle, Mrs Bassindale, Miss Stainforth, and Miss Clark. Over a score of old folk, including the old roadmen, feasted themselves and had a good time, through the kindness of Mr Jos. Franks. About 7.30 the dance commenced, Messrs Holt and Clarke providing the music. Over 40 couples entertained with spirit into the popular pastime, and the proceedings were of a most jovial nature.

1907 Sep 7th
LARCENY AT CROWLE
At Epworth Police Court, on Tuesday, before T J Blaydes, Esq., and W Standring, Esq., Emma Robinson, of Crowle, was charged with stealing a pint bottle of stout from the dram shop at the Fishmongers’ Arms, on the previous day.

Joseph Outibridge, landlord of the Fishmongers’ Arms, deposed that about 10a.m., on the day in question, he filled the shelves in the dram shop with bottled beer and stout. About 11a.m., the prisoner came to the house and asked for a half pint of beer in a bottle. He asked her if she had a bottle. She replied, “no,” and he refused to serve her. At about 11.30a.m., he left the dram shop to go into the kitchen for a few minutes, and on returning saw the prisoner standing near the entrance to the dram shop. She asked to be supplied with a pint of beer in a bottle which she produced, and he served her. Shortly afterwards he missed a pint bottle of stout from off the shelf in the dram shop. Suspecting prisoner, he went in search of her, and being unable to find her reported the matter to the police. He valued the stout at 4d.

Inspector Skipworth said that from the information received, he visited the Fishmongers’ Arms bout 3p.m., and on making an inspection of the place, noticed a woman’s footprint on some boards which had recently been scrubbed, opposite from the place from which the stout was missing. Robinson was suspected, and he went in search of her and found her in High Street, begging of foot passengers. He told her a bottle of stout was missing from a shelf at the Fishmongers’ Arms, and he suspected her of taking it. As she denied all knowledge of it, he took her back to the Fishmongers’ Arms, and showed her the footprint on the board, and on comparing her left boot with the mark, found it corresponded. He then charged her with theft, and conveyed her to the Police Station. She subsequently admitted having stolen the stout, and said she was sorry. The empty stout bottle, produced, he found in the Crowle Churchyard.

A fine of 5/- and 7/6 costs was imposed, the Chairman remarking that they were sorry to see prisoner in her present position, but if she appeared again she would have to go to prison.

1958
Friday, August 29
K-K-K-KATIE TO CARRY BRIDAL COUPLE SOMEONE special will be at
23-years-old Eric Seaton’s wedding at Crowle on Saturday. Someone he
has cared for and taken a great pride in ever since he left school.

She is “K-K-K-Katie”, Mr Dick Spivey’s veteran Gladiator car which is
well known in the district.