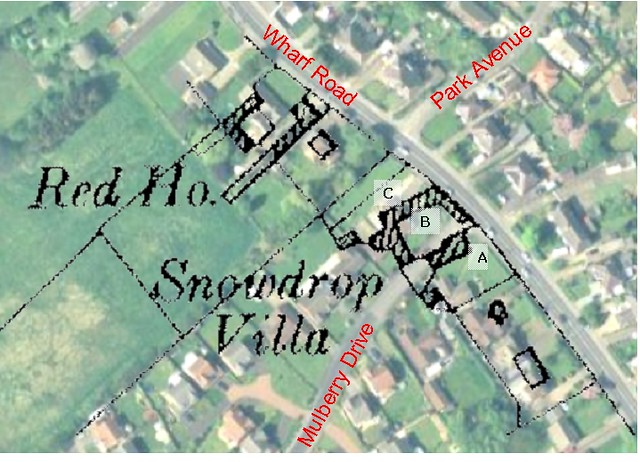 This farm and much of its land disappeared under a housing development sometime in the 1980s. It was opposite numbers 44 and 46 Avondale, Wharf Road, the latter being a large double fronted semidetached that my father bought for £550 in early 1932, shortly after Cyril, (known a Bucket behind his back) Proctor, builder, carpenter, occasional undertaker built it together with his own house no. 44 next door. Bucket, to quote my father, was known as Bucket because that was as big as his head was, both physically and mentally. I only hope his daughter Judith never gets round to reading this. 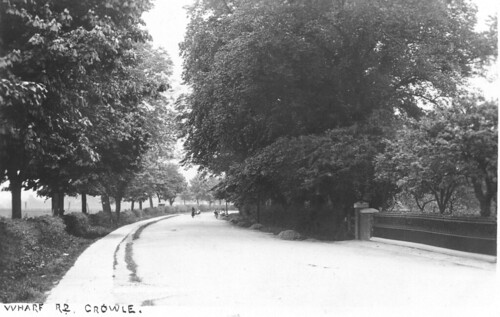 Looking south. The railings in front of Snowdrop Villa.

The large orchard about half an acre just beyond. That orchard went white in February from the thousands of snowdrops planted there.

Directly opposite is Crowle Park where a wealthy Crowle man is reputed to have planned to have built a mansion. Which is why trees were planted spaciously round it. The second wider tree on the left was our tree, a horse-chestnut. The drive into no. 46 Wharf road was just in front of that tree. The one in front was in no. 44, Bucket’s garden.

About 1945, when fuel was still rationed, that horse-chestnut blew down fortunately landing on the drives between our house and Mr Bill Slingsby next door. My father notified anyone one with a saw was welcome to what they could get, by nightfall the tree had disappeared and we had enough wood to last over two years. Although I will not mention who had to do most of the work sawing and splitting it into logs. My father wore a two inch wide leather belt, which rendered any complaint on my part superfluous.

The tree in no 44’s garden disappeared in 1980. That was the year we put no. 46 on the market and I found and had to treat a large amount of wood worm in the front box room. The source was that tree which was soon cut down.

Three houses occupy now occupy the orchard. The first a large double fronted detached was built by a Mr. Whitwood. His wife was a diabetic and when his daughter was on holiday my wife resident in Crowle at the time would give her, her insulin injections. My wife unfortunately was buried in Crowle in her middle twenties for some eighteen months, she has never been enamoured by Crowle ever since. The possibility of divorce was mooted when I suggested moving back into the area when I retired. I did my National Service from November 1958 to December 1960. I was posted to Aden. Margaret got a Sister’s post at the local hospital at Steamer Point and was to join me after some three months. An unexpected accident occurred on my embarkation leave, known as William Fredrick Goldthorp, who arrived on 28th September 1959. National Service pay was less than regular army pay and transport and living accommodation for wives was not provided. Both were prohibitively expensive. This was a ploy to force young doctors to sign on as regulars and waste years of their careers in the services. As a result Margaret born in London and brought up in Manchester was stuck in Crowle with a baby and no husband for 18 months. She found the people kind and helpful but was bored.

Employment would have overcome boredom, but then Margaret was landed with problem of transport and the attitude of the NHS at that time to employing nursing staff.

The matron at Scunthorpe War Memorial Hospital was not exactly thrilled to interview a young woman who qualified at the Manchester Royal Infirmary, one of the major teaching hospitals in the country, especially one who had been promoted to Nursing Sister at 23. Margaret would have been happy as a Staff Nurse in the Casualty Department but, “ It does not matter if you last bus to Crowle is at 9 pm and you have a baby boy, if an emergency arrives five minutes before your shift is up you will stay”

Not an uncommon attitude at the time. Nursing staff were terribly exploited; operation lists due to end at 5pm going on until 8 pm. and no overtime payments either. 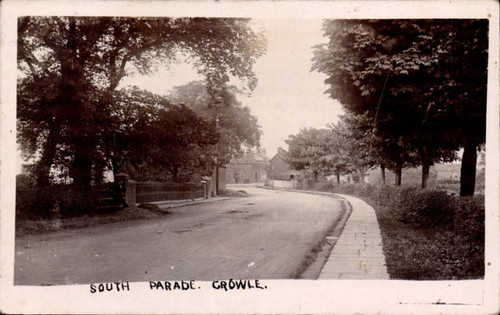 Looking north along Wharf Road, towards Crowle South End, the railings in front of Snowdrop Villa, the gate, then a single story farm building that was converted into offices. The house can be seen behind the trees. This would be the view prior to 1931. Our house and Bucket Proctor’s next door were the first to be built on the right. The tree with the thick trunk was our horse chestnut tree. This was the first new housing development in Crowle and within a few years houses had been built all the way to the end of Crowle Park. The field beyond opposite the Secondary High School was declared green belt to prevent ribbon development all the way to Ealand. Snowdrop Villa was the first house approaching Crowle after the farm house at Ealand Outgate. 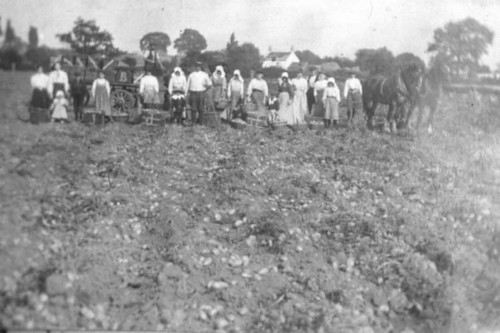 Potato picking, with Snowdrop Villa in the background. 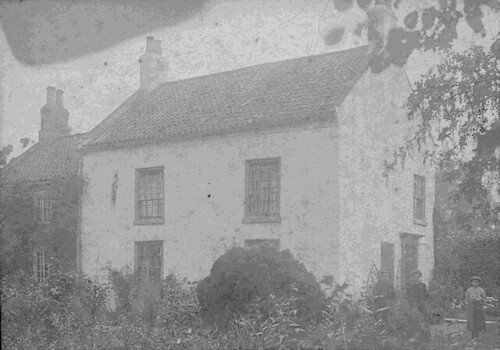 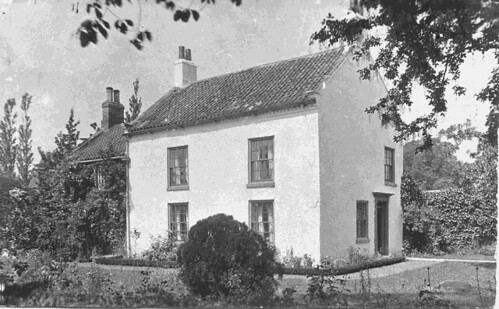 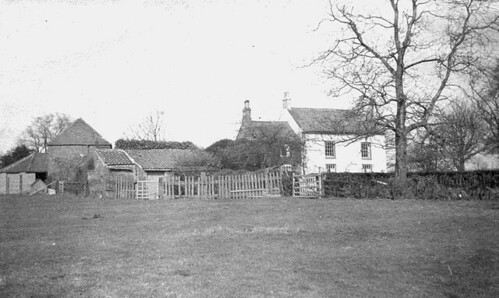 Snowdrop Villa, from the south west taken from the paddock at the back of the house. 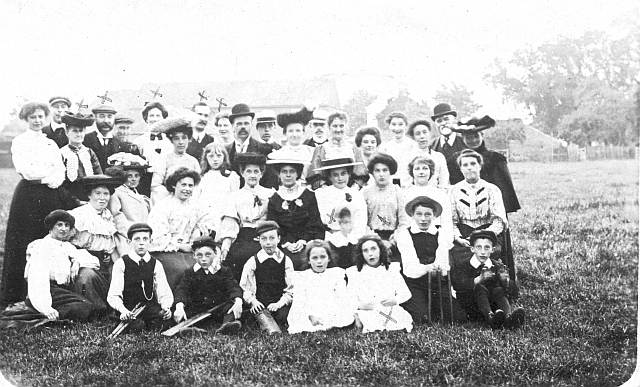 A late Victorian gathering of friends and family of Ernest Arthur Chapman, in the paddock behind Snowdrop Villa. I believe E.A. Chapman, is the fourth from the left in the flat cap marked with a cross. 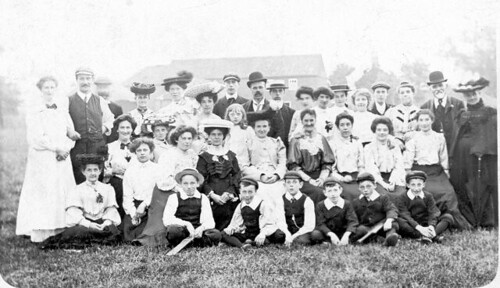 Probably the same occasion but the lads have stopped the girls muscling in. E.A.C is not very clear in this photograph. 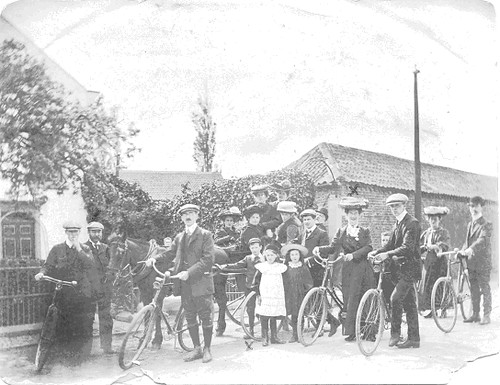 A cycle club meeting in the front of Snowdrop Villa. At this time Snowdrop Villa was occupied by Ernest Arthur Chapman, farmer, clerk to the burial board, registrar of births, deaths and marriages for Crowle sub-district. Assistant overseer and collector for the Urban District Council and bailiff to Earl Manvers.
E. A. Chapman is standing second from the left in a flat cap next to the horse head. 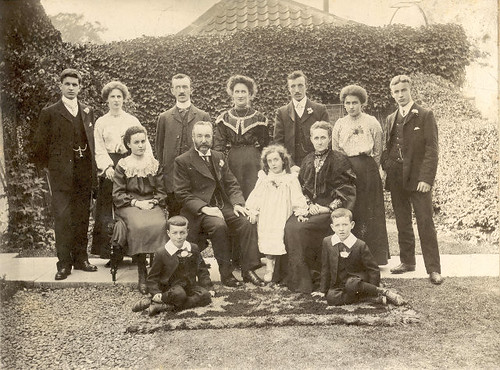 Although I have had this photograph some time I have only just worked out where it is, and who the people are. If you inspect the above photograph and the first one of the house, it is in the front garden of Snowdrop Villa, E.A. Chapman and family. Grandma Chapman was well into her eighties when I knew her, she had retired with two of her daughters to Bridlington, both teachers, I think, extremely dour and strict Methodists, whose visits were not looked forward to. Grandson Brian (Chippy) Chapman spent most of the time at our house when they visited, leaving his sisters Marion and Freda to cope as best they could.

Grandma Chapman was considered a bit of a miracle worker having had ten children who all survived and were extremely healthy. All ten were well educated and had good occupations. There are eleven in this picture, the young gentleman on the left seems a little bit darker and different from the rest. I wonder if he was a fiancée or husband. To what extent the family was affected by the 1st World War, I do not know, it is unlikely that they escaped Scot free. Alf Chapman one of the younger sons spent part of 1918 serving in the trenches.

When my father bought 46 Wharf Road it was occupied by Mr. Alf Chapman, Registrar of births, deaths and marriages ( The fifth member of his family to hold the position), Clerk to the Drainage Board and Insurance Agent. The lady with the x bears a resemblance to his daughter Freda.

Alf built the large detached house at 60 Wharf Road and when he moved in Snowdrop Villa was taken over by the Axe family. The single story building was used by Alf as his offices and billiard room. It was in that billiard room after he moved into 46 Wharf Road that my dad and Alf became friends as a result of which I grew up closely involved with the Chapman family. Alf was educated at Goole Grammar School taking advantage of the passenger service on the newly opened Isle of Axholme Light railway. 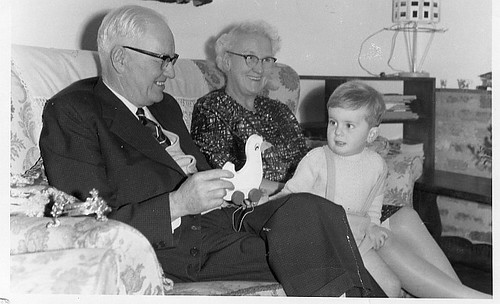 Alf and Mrs Chapman, ( nee Johnson of Crowle Grange) with their first grandson. 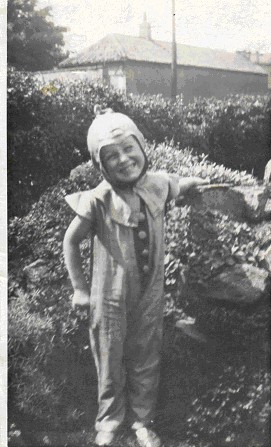 Another view of the single story building at the front of the fold yard at Snowdrop Villa, Crowle carnival 1938. Note the chimney. Previously the building had been used for farm purposes, but the chimney was added when Alf Chapman converted it to offices and a billiard room.

You are only allowed one guess as to who the five year old is, wearing the pea pod suit, proudly made by his mother.