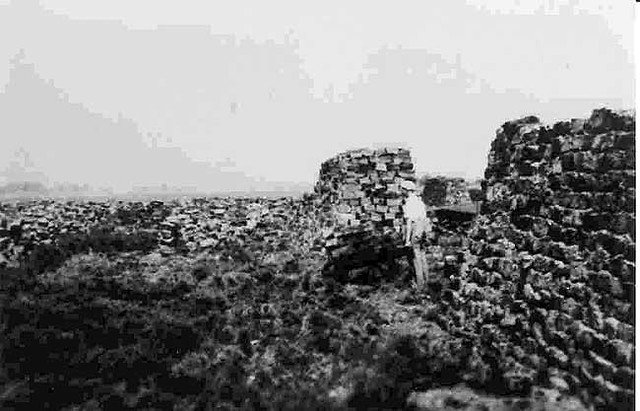 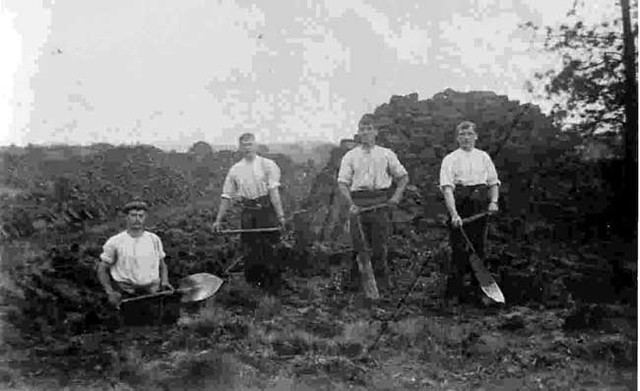 Circa 1910. Mr. Tune and gang cutting peat on Crowle Moors.

Cutting peat for fuel on Crowle moors, has been going on for several centuries. If you read the old documents, there are several accounts of bodies being found, which of course rapidly decayed. These are now known to be either some form of human sacrifice or a form of punishment. They date from about 2,000 years ago. That is Celtic in origin and have been recorded in bogs and moors in Northern Germany, Holland, Denmark, other parts of Britain and Ireland.
The bodies are always of high status people, usually killed in multiple ways. (, Garrotted, cut throat, head blows and drowned) The bodies always held by saplings under the water.
Pete Moss, is the most well known in UK, found in Lindow Moss in Cheshire about twenty years ago. He has been fully investigated, even his last meal and his face has been reconstructed. The modern way of using massive machines to extract peat, which are now banned in many areas, probably destroyed many bodies.
In 1747 the body of a woman was found at a depth of 6 feet. 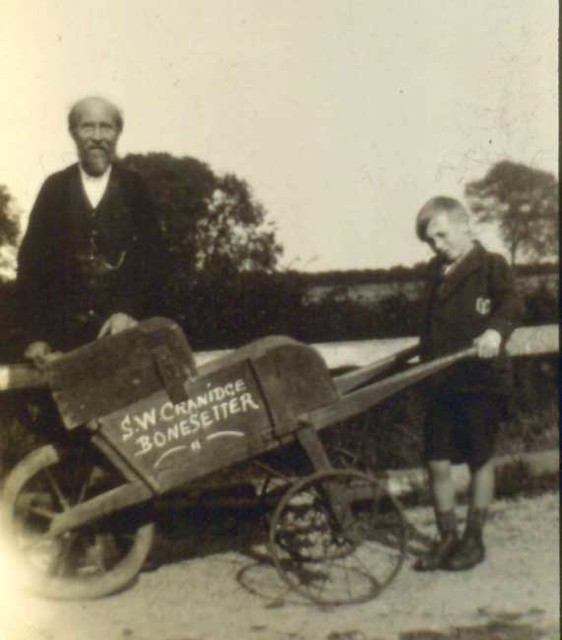 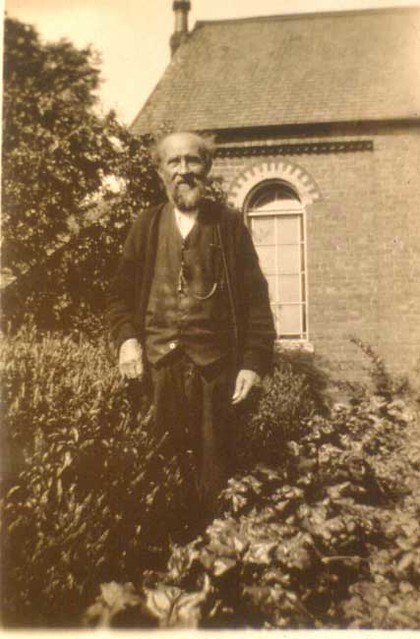 He would also act like an osteopath, using massage and manipulation for various aches and pains. He had probably been trained by his father. His results just as good as the local GP and probably cheaper.
The Thomas Splint, used to splint the leg when the femur is fractured has never been improved upon and was used extensively in both World Wars, was invented by an Orthopaedic Surgeon, Mr. Thomas, who came from a Welsh family of bonesetters. 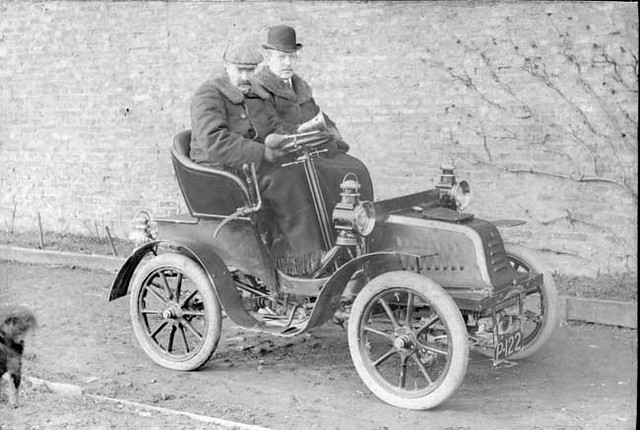 White’s Directory in 1892 records three doctors. Archibald Hamilton LRCP LRCS, Physician and Surgeon, Medical Officer of Health. Augustus Warren Woodruff BA, MD Surgeon and Medical Officer Luddington District, Goole Union, Ahern House. ( That is the Workhouse for the northern part of the Isle.)
He also had a junior partner Woodruff and Benton Surgeons. There were no local hospitals, but ether and chloroform were available as anaesthetics and the importance of asepsis and antisepsis known. They would have operated in the patient’s homes which then had a great advantage compared to hospitals, that is they would have been free from dangerous bacteria. Three professional medical men making a living in Crowle and district reflects the basic wealth of the area.
There were also two vets. Joseph Sharp MRCVS and A Brassington MRCVS, reflecting the importance of farming. 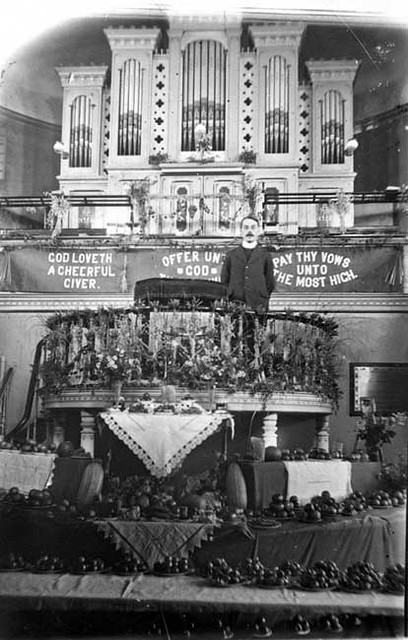 Road Sweepers
This photograph is taken from the north, approaching Eastoft from Goole. 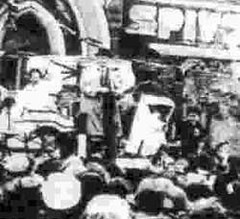 Pinky Green, headmaster of the Council school on Fieldside.
( From a War weapons’ week photograph). Originally known as the Board School in the 1890s Mr. J H Lee was the headmaster.

There were still blacksmiths in Crowle when I was boy. The one I remember most and visited often was on the left hand side at the top of Godnow Road. Both the Smithy and the house has now disappeared. I remember marvelling at those large strong heavy hands, whose owner was a tall a slim man not the heavy muscular type one associates with blacksmiths. What intrigued me most was his hobby and part time occupation. He repaired watches and clocks. That is where my father sent me when a watch needed repairing.
Garages were beginning to replace smithies. 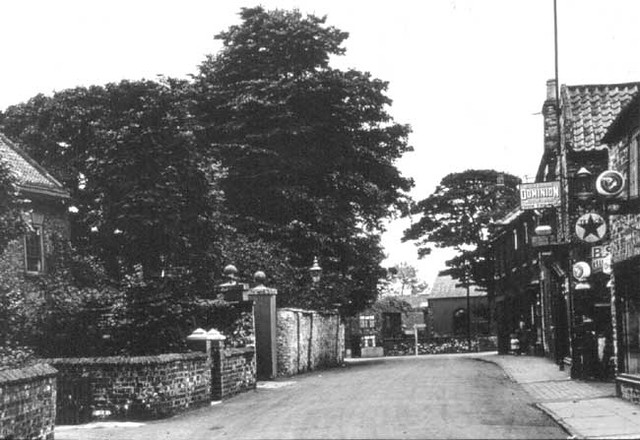 Mr. Long’s garage on Woodlands Avenue, before he moved to Eastoft Road, where later his son Reg ran the garage until he retired. 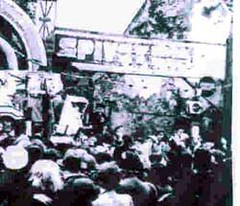 Theirs in the Market square in the 1940s. 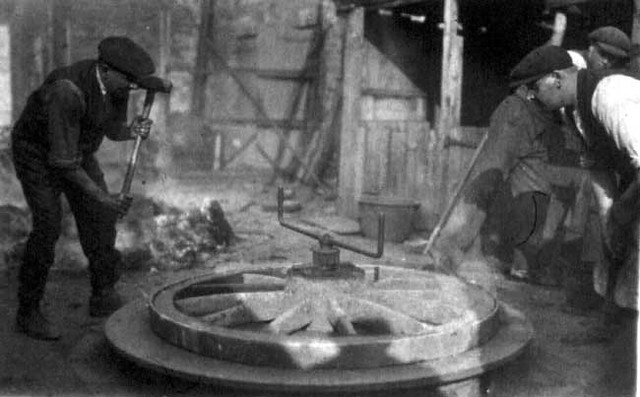 The blacksmith’s at Eastoft was just beyond the River Don Inn, where the road divides into two on either side of the old bed of the Don. I have watched the Eastoft blacksmith, carrying out this procedure on the green opposite his smithy. The carpenter has made the wheel of wood, the smith has heated an iron tyre in the fire to the rear, when red hot it will have expanded to go over the wheel, water is used to cool the tyre and any overlapping parts are hammered home. 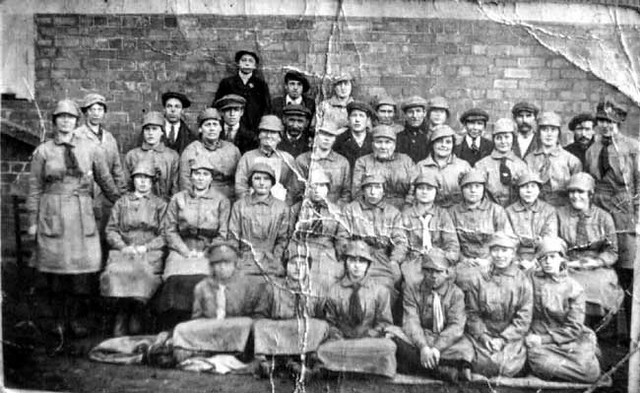 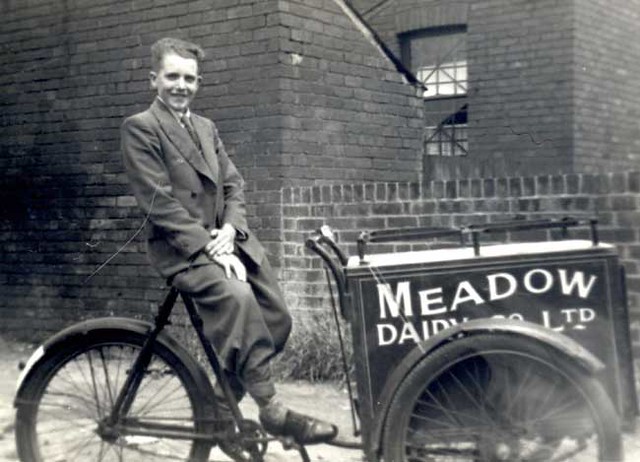 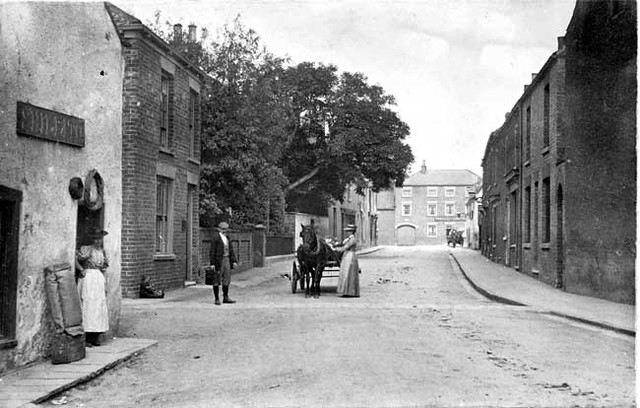 The milkman, this was how our milk was delivered before the war. I can just remember it. Mr. Till from Medge Hall, drove along our road in a pony and trap with two or three large milk churns and two measures a pint and a quart. Measuring the required amount into jugs and other receptacles. The importance of pasteurising milk was just beginning to be understood. In about 1940 he installed a pasteurising and bottling plant on his farm.

Pasteurising, not sterilising, heating the milk to about 70 degrees centigrade, which killed of the vast majority of bacteria, especially tuberculosis, streptococci etc. Bovine (cows) Tb. was a major cause of swollen neck glands, something I have not seen for over thirty years. It was known as King’s Evil, the touch of the King’s fingers would cause them to disappear. Charles 2nd was the last king to touch for King’s evil.
His wife reached the age of 100 in 2006, resident at the rest home on Fieldside.

Alf Chapman, Clerk to the Drainage Board, Insurance Agent and Registrar of Births, Marriages and Deaths.
Alf was the fifth generation of his family to be registrar.
Kelly’s early 1890s register records his father Earnest Arthur Chapman, Registrar of Births Marriages and Deaths, farmer, Clerk to the Burial Board and bailiff to the Lord of the manor. 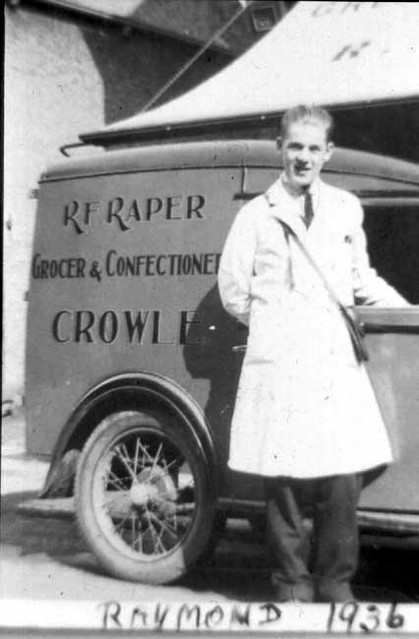 Mr. Raper Grocer.
He would be working for his father eventually taking over and making it into a Spar mini-market. 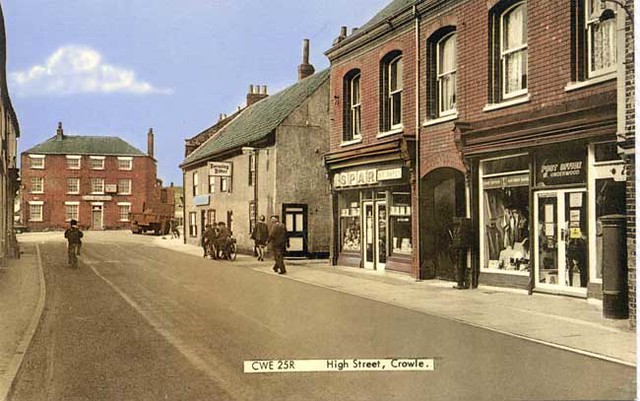 Early fifties, the Spar shop, Mr. Raper’s sister and her husband ran the Post Office and dress Shop next door. The Cross Keys (red), and the White Hart (light gray), the oldest inn in the isle of Axholme one of about 15 pubs in Crowle, in spite of it being a hotbed of Methodism. In 1900 there were two breweries, one of which was still functioning after the war. (1945) 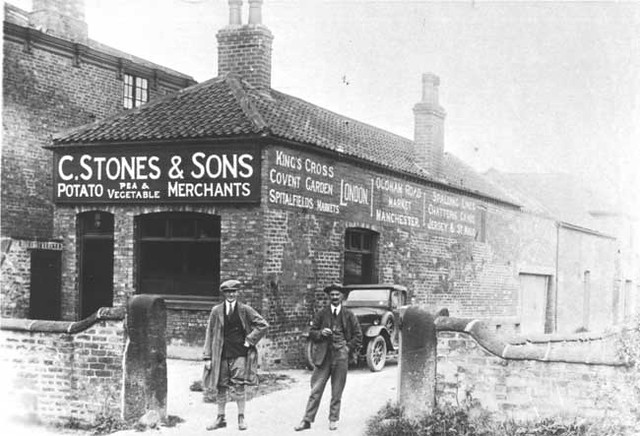 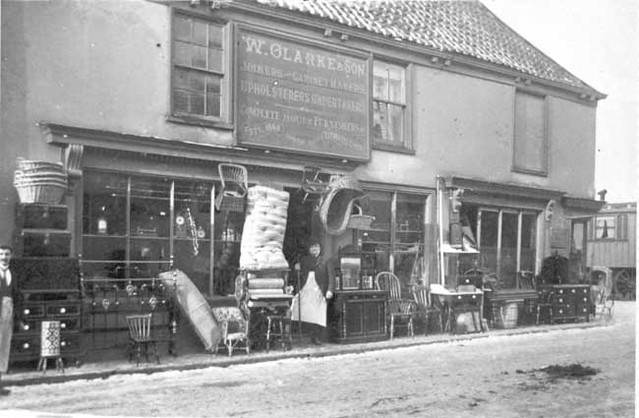 Mr. Clarke, General Dealer, these days he would either be running an Antique Shop or Junk Shop, between 1900 and 1910. 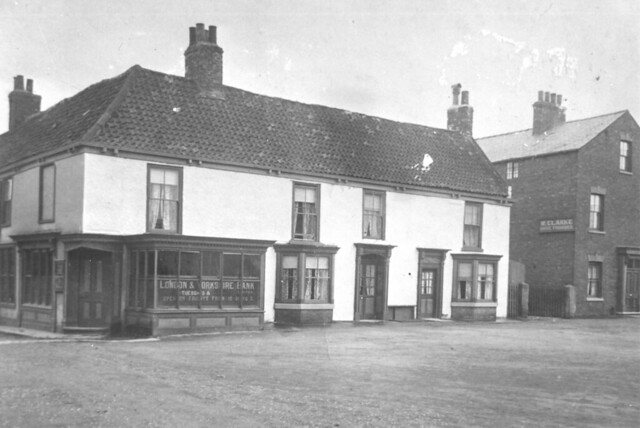 London and Yorkshire Bank, eventually before it closed National Westminster. 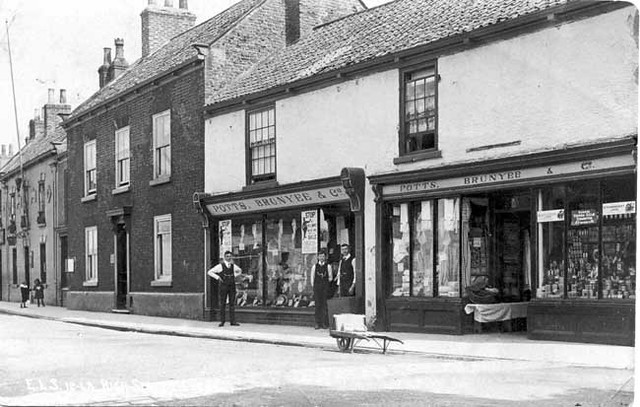 Potts, Brunyee and Co. on the High Street, where the library is now. 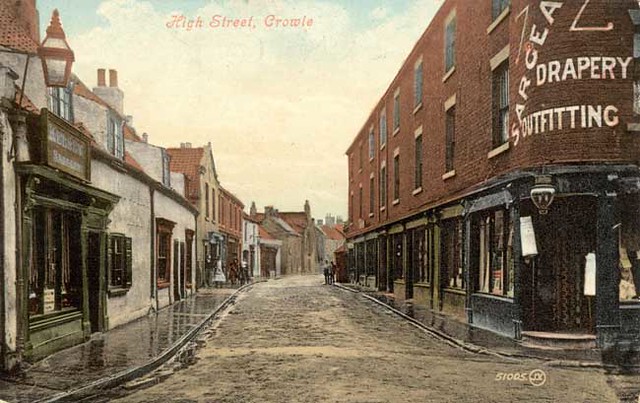 Dysons Drapery when I was a boy, now converted into flats. On the left Sam’s the working man’s barber, which I have described in a previous article, now knocked down. The white building further down the left side of the street was Seniors, The Gentleman’s Hairdresser. 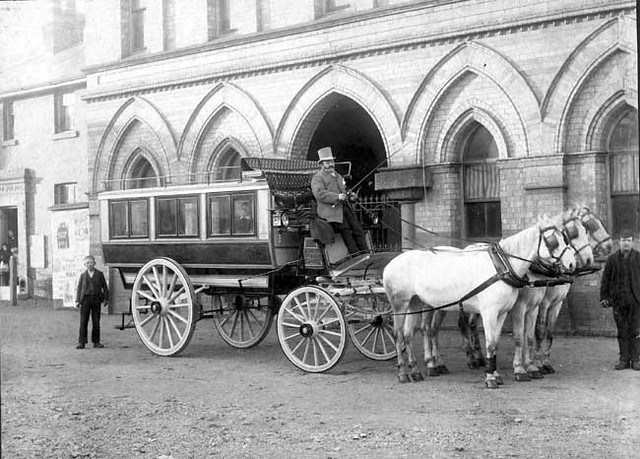 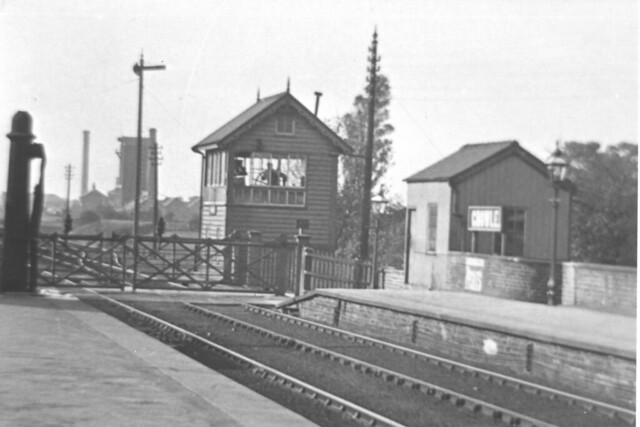 A Flax Mill was installed in the old brewery during WW1, in the distance behind the signal, about 1910.

The Stationmaster was William J. Tippet. 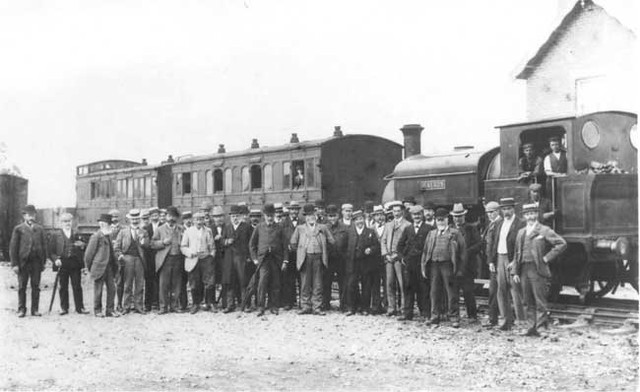 1906, first passenger train on the Isle of Axholme Light railway.
There were stationmasters and no doubt a porter at Both Crowle and Ealand stations.
Mr Watkins was the one at Ealand.

One thought on “Non Farming Occupatons Around Crowle & District”