By Angus Townley
According t the following article, Justice Hall was built in 1728 by George Stovin – the antiquary and was so named because he was a magistrate – this has nothing to do with the Manor of Crowle.
A search of possible sources provides an answer in “Lincolnshire notes and queries, Volume 4” published in 1896. This is available on-line at http://www.archive.org/stream/lincolnshirenot01sympgoog#page/n6/mode/2up
Page 89/90
Lincolnshire Notes & Queries. 89
55. Family of Stovin. (Vol. IV., p. 62.) ” In reply  to the query respecting this family, I append an extract from ” Notes on the Parish Register of Crowle,” published in an almanac at that place about ten years ago :
“Under 1606 the name of Stovin appears for the first time, George Stovin marrying ‘ An ‘ Turn hill, on 1st December. The name occurs pretty frequently after,  but it is impossible to work out a pedigree. In 1621  Frances, daughter of George, was baptized, and in 1642  she was married to Simon Empson, apparently the first or  the intermarriages between these families. In 1638  George Stovin married Elizabeth Margrave, and in 1640  Robert Stovin espoused Elizabeth Pinder, The Stovins  were the owners of Tetley in Crowle, but when they  acquired it has not yet been ascertained. The so-called  tradition which the crest – a strung bow – is made to  support, that the first was the chief of the bow stringers  in the Conqueror’s army, is unworthy of consideration.
The owner of Tetley in the time of the Commonwealth,  George Stovin, seems to have become a Quaker, and for  attending unlawful religious services was taken off to  Lincoln Castle and died a prisoner therein, as the antiquary had heard from his grandmother and his uncle  George, then 16 ; so in 1680 if the George baptized in  1664. Further particulars are given in the local history  by Archdeacon Stonehouse. He married Ann Clarke, a grand-daughter of Richard Brewer, of Crowle. James Stovin, Esq., of Crowle, their son, on account of his  independent character and large property, possessed great  influence in the Isle. He was High Sheriff of Lincoln-shire in 1725. His house was the large rambling one on the south side of the Market Place
Mr.  Stovin afterwards bought Tetley of George, his elder brother, went to live there, died there 11th Oct., 1739, aged. 61, and was buried in the grounds next his wife, who died ten years before. He left five sons and three daughters, the eldest of whom only he seems to have had baptized, George, on the 1st March, 1695-96.
This  was George Stovin, Esq., the antiquary, of whose life and character Mr. Hunter in his History of South Yorkshire gives us some interesting particulars, which are here added to. On the 22nd April, 171 7, he was married in York  Minster to Sarah, daughter and heiress of Mr. James Empson, of Goole, and two or three years after came to  live at Crowle, building a small house for himself, which from his being already a magistrate was called ” Justice Hall.” Over the porch are the arms of Stovin,  G.S.S., and the date 1726. He was not brought up to any profession, but led the life of a country gentleman, which afforded abundant leisure to prosecute his favourite topographical and antiquarian researches, taking great interest in the affairs of the neighbourhood. He scarcely ever left the Levels, living at Crowle, and with the true feeling of a native antiquary, thinking no part of  England comparable to Axholme, and no town equal to  Crowle. He might lead a quiet and sober life, but  domestic sorrows multiplied. He buried five children in the grounds at Tetley. George, his dutiful son, whom he had entered at Gray’s Inn, died at the hopeful age of 17, and was interred in the chancel. In 1745 his wife died, and though he buried her in the church he put a gravestone to her memory at Tetley, with an incomprehensible coat of arms, quarterly : i Stovin, 2 Empson, 3 Clarke, 4 Smithson.
In spite of his regard for Crowle in the latter part of his life he crossed the Trent, and fixed his residence at Winterton, placing over his door  there also a carved shield with his arms and his wife’s, as  at Justice Hall. ‘There he spent the concluding years of  his life, living,’ writes Mr. Hunter, *as I am informed by one who knew him well, in a little cottage which he had  made arcadian with honeysuckle and other flowers, where  he was to be seen every morning at five with his pipe. Having a good memory, and full of anecdote, he was  accustomed to amuse his neighbours.’ He died in May, 1780, aged 85, and was buried in the chancel of Winterton church, on the 14th, but he who had erected so many memorials never had a monument placed over him. He  printed an account of Lindholme on a single sheet, which is now a rare curiosity, and left behind him a quarto
MS. of over 400 closely written pages, which Mr.  Hunter had the use of, and of which an abstract by the  late Mr. Charles Jackson, of Doncaster, appeared in the Yorkshire t/trchaological Journal, He left a son James.  His sister, Susannah, married at York Minster, in 1738,  Mr. John Froggatt, and had with a son, two daughters, Mrs. Stovin, of Hurst Priory, and Ann, wife of Thomas Lightfoot, of Crowle, Surgeon. Another sister of the  antiquary, Ann, married Thomas Lister, of Eastoft,  Gent., who died in 1729, and has a pretty tablet to his  memory in the chancel. She married afterwards John  Cowley. Her son, Thomas Lister, Esq., was the last of
the family, but not of the name, for he left his property  to his mother’s nephew, George Stovin, of Tetley, on condition he took the name and Arms of Lister. . . “
From The History of Winterton and the Adjoining Villages by William Andrew (1836)

About this period, Mr. Thomas Place, a respectable inhabitant of the town, built, probably on the site of the old mansion of the d’Arcies, a substantial new hall: the walls being one yard in thickness, and formed of  good stone. From this person’s extreme benevolence to the church, recorded elsewhere, and other acts of kindness done to the town, his estate became involved, and having been mortgaged to the family of Stovin, at his decease it fell into their possession; their crest and court of arms may be seen to this day, in bold relief, over one of the northern doors. A descendant of this family, proving  a careless man, and a spendthrift, his likeness at his decease, with those of other degraded  relations, were allowed to hang upon the walls  of the rooms, as a lasting memorial of extravagance and folly. The house is now tenanted  by Mr. N. Blanchard, who likewise rents the lands formerly held by the before-mentioned Thomas Place.

Stovin Coat of arms as described

No gravestone remains to mark the exact spot of his interment At one time it was thought likely that it might be under one of two pews, but when these were removed nothing was found ; nor does the record of any monumental remembrance of the deceased antiquary exist. In front of the old hall at Winterton is a shield carved in stone with the arms of Stovin, viz. : — Barry of six or and gules, in chief a label of five points ; impaling Empson, Azure a chevron between three crosses formee argent. Crest, over the helmet, a bow with the string drawn and the arrow ready to be discharged. 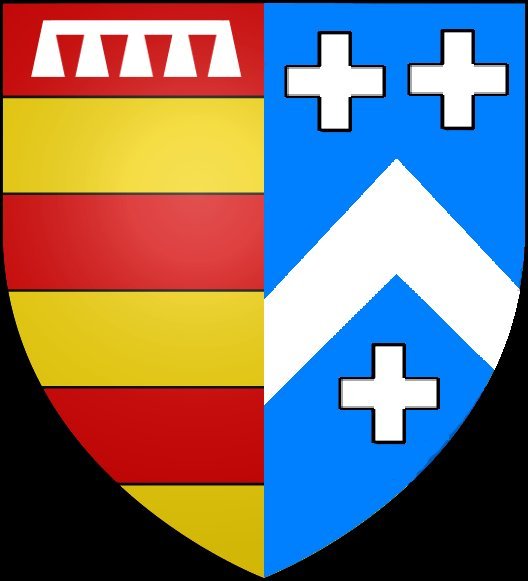