Crowle man sells his wife for £40

An incident that took place in 1877 in Crowle caught the attention of many newspapers and was reported far and wide. The following is quoted form a New Zealand newspaper.

As can be seen from the news clips from the Times it may not have been quite such a clear cut case of  selling ones wife!

Selling- a wife.— An “extraordinary occurrence took place the other
day at Crowle, Lincolnshire. William Liggott, a pork butcher, sold his
wife for £40 to Chapman Pidd, landlord of the Fishmonger’s Arms. Tho
articles of sale were drawn up at a solicitor’s office, the money was
paid, and the wife handed over.  Both parties, it is said, appeared
satisfied with their bargain. Pidd has only been a widower a lew
months. 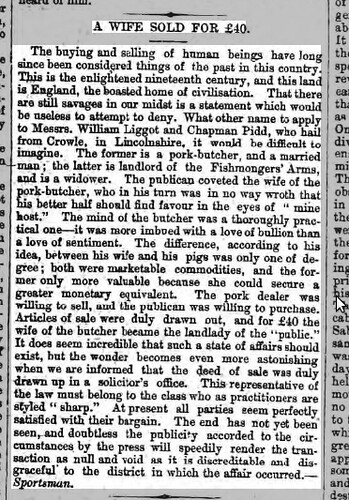