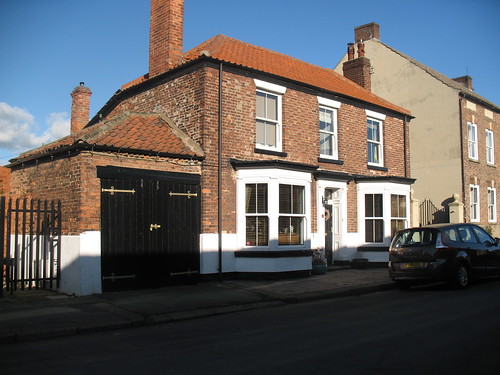 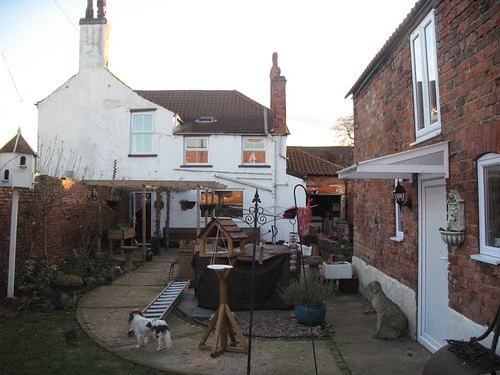 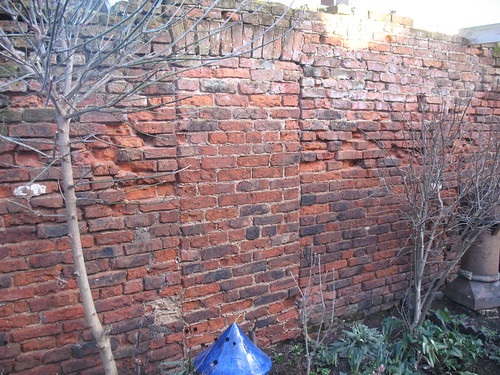 Blocked in doorways between Oswald House and the Hall

The green/blue coloured section shows the bequest by Richard Clark in 1721. At foundation the scholars were 32. The master was paid £32 plus an allowance for coals. Later scholars were increased to 50, masters’s salary also £50. Later the schoolroom fell down and the church vestry was used. Mr. Thomas Hodgson was the school master.

Oswald House Plot extends all the way back to what is now printing office lane. It is numbered 55. The foot print of the house is not the same as in the subsequent maps.

The survey describes the property as “A dwelling house, barn & garden adjoining Marmaduke Scutts having no right of common.”
The owner is Richard Somersby, who also owned another property in Crowle as well as a couple of parcels of lands on the moors.
The property, to the left, shaded green on the plan is the charity school.
The property to the right is inhabited by Marmaduke Scutt.

Accompanies the large plan. Oswald House is listed as plot 55 – see plan below.

Copyhold Properties in the Manor of Crowle

122 Another Dwelling house, Barn and Orchard having Right of Common

39 In the Lincolnshire Moors

102 In the Yorkshire Moors

50 In the Yorkshire Moors

In the Hall 56 – Marmaduke Scutts. A dwelling house homestead and garden with Right of Common.

Behind the Hall 57 – William Empson. A dwelling house homestead and garden with Right of Common. 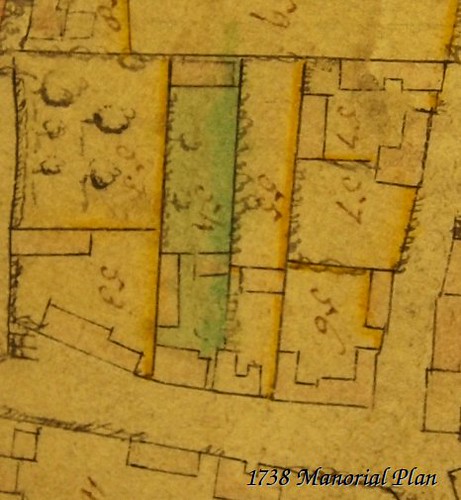 The current owner, Ron Stewart, is fortunate in that a previous occupant of the house sent him the original deeds for the house and from these it has been possible to build up a fairly complete history of the house.
The earliest deed is an indenture dated 24th May 1877 recording the sales of the property by Sarah Ann Maw of Oxton, widow, to Frederick Sale of Crowle, butcher This document includes a schedule of earlier documents – the earliest being 20th March 1839. This refers to a Marriage Settlement between Sarah Ann Peacock (1) Henry Lister Maw (2) and William Godfrey and Francis Wharton (3) 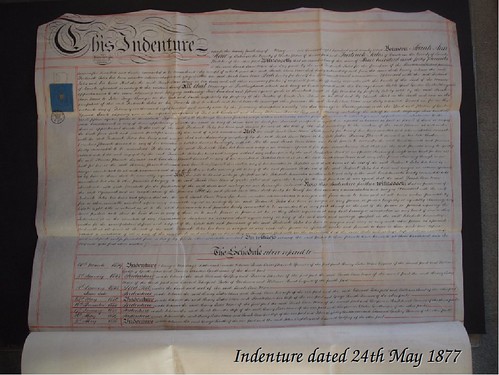 Cornelius Peacock was born in 1733, the son of Thomas and Sarah Peacock of Scotter.

‘Corney’, as he was called, lived at Tetley in a large farmhouse surrounded by Trees. He was a hemp and flax merchant and appears to have had a warehouse at Gainsborough.

The National Archives has the copy of a tender from Cornelius Peacock, of Crowle and Thomas Brumby (nephew), of Retford bidding to supply 250 tonnes of British Hemp to be delivered to the British Navy at Woowich in the years 1765 and 1766. The total value of the tender is £8,900 (probably equivalent to about £15,000,000 today)

He was buried in the church graveyard. A distant relative described visiting the tomb in 1939;

In the south west corner of the churchyard within an iron railing, much overgrown with elder bushes, are two altar style gravestones. Both are in good condition and on the top slab of one is the following inscription:-

“Sacred to the memory of Cornelius Peacock, merchant, who died on the 21st June 1812 in the 79th year of his age.

A great benefactor to the labouring poor of this place this tribute at the shrine of departed worth is dedicated by his only son Thomas Peacock.

Thomas Peacock the only child of Cornelius and Sarah was born in 1763.
He married Sarah Marsden with whom he had three children, Cornelius, Sarah Ann and Thomas,

The Crowle Peacocks had frequent and regular business connections with their Northorpe cousins. Thomas visited Northorpe and at times went shooting with Edward Shaw Peacock and their mutual friend Achdeacon Stonehouse, the historian of the Isle of Axholme. On one of his notebooks now preserved at the John Rylands Libray in Manchester he describes Thomas Peacock;
“This gentleman was an extraordinary character. He was kept in a state of pupilage by his father until he had attained mature age, when he became heir to a considerable property. He was what we generally term rather soft, which defect was greatly increased by his manner of speaking. He repeated the same words over and over again. He took care however, to take care of his main chance and would sometimes exert himself with a vigour of understanding which astonished those who thought they could impose on him.”
“Another story related of him was, that on crossing the Trent by the ferry, he let his wife and gig go over, and then made them come back, being afraid. He had however, some very good traits in his character, and was always ready to help an industrious man with his heavy purse. There were many who laughed at his weaknesses who did not practice his virtues.”

Will of Thomas Peacock of Crowle
Sarah, my dear wife – £500 per year or £200 if she remarries.
Dwelling House in Crowle, wherein I now reside with garden and homestead
Field Close – recently bought from Mr Maw and others
Grime Hill Close
Tacks Close
Present issue of said marriage;
Cornelius Peacock
Thomas Peacock
Sarah Ann Peacock £10k or if married £5k and £5k to husband
The two boys Cornelius and Thomas are to be tenants in common of the rest of the estate, the eldest or survivor to have the house and option ofpurchasing the whole at 21.
Appointed trustees and guardians;
Mr Edward Peart
Mr William Rhodes, both of West Butterwick
Mr William Marsden of Stamford (My Wife’s eldest brother)
Mr Charles Darley of Thorne, Merchant

If no living heirs at time of death then the following would inherit;
Elias Serjeantson, Joseph Serjeantson, Elizabeth Barrett, Sarah Tune, and Mary Jakes – sons and daughters of the late William and Mary Serjeantson, formerly Brickmakers in Crowle. £500 apiece
Robert Foster, my assistant in the flax trade – £500
John Hind (Miller) £300
Cousin Cornelius Oxley – the interest of £1000 during his life
Cornelius Hartshorne Stovin of Hirst Priory £1000
Thomas Peacock Wreakes son of John Wreakes late of Field Head in Sheffield £1000
John Keightley, son of Michael and Ann Keightley of Misson £1000
Holmpton Estate in Holderness
Gilberdike Estate in Yorkshire
Scotter and Scotterthorpe estates
For use of Edward Peacock, son of Thomas and Martha Peacock of Northorpe
Will signed 15 Sept 1822

Thomas is buried beside his father Cornelius. On the west wall of the chancel of Crowle church there used to be a memorial tablet as follows:-
To perpetuate the memory of Thomas Peacock Esq of this place who died regretted by his relations and friends on the 8th of July 1827 aged 64 years. And of Thomas Peacock, son of Thomas and Sarah Peacock, who departed this life on the 1st January 1826 aged 8 years. This tablet is erected as a tribute of affection by the surviving widow.

She married Henry Lister Maw of Tetley Hall on 21st March 1839 at the age of 22 – he was 15 years older than her. The wedding witnesses included her brother Cornelius and Henry’s mother Elizabeth.

Henry Lister Maw entered Naval service on 11th May 1818 and was for sometime midshipman of the Liffey. He saw action in Rangoon and was rewarded with a Lieutenants Commission, He had returned home in 1824 having been injured in the head. Subsequent naval appointments took him to South America where he is remembered for his passage from the Pacific to the Atlantic Ocean, crossing the Andes, in the northern provinces of Peru and descending the Amazon River – the journey is described in his book published in 1829. For this he received Silver Medal from the Society for the Encouragement of Arts, Manufacture & Commerce in 1830. He left naval service in 1834.

Henry inherited Tetley Hall, on the death of his father, John Henry, in 1826. Tetley, had been left by George Stovin to his eldest daughter Elizabeth in 1797, who married John Henry Maw in 1800. The main range of Tetley Hall was built by Henry Lister Maw between 1829 and 1839

A year later her brother died at the age of 24. As he had not married she inherited the entire family estate,

After the death of her brother and her marriage to Henry Lister Maw, Sarah Ann would have no need for the properties on Church Street and it is apparent that they rented the properties out.

Brothers Henry & Phillias Ellis, both surgeons moved into The Hall and Oswald House. Henry appears to have been the resident of Oswald House, although it may be they used the two properties as one and that Oswald House was used by the Groom.

Their father was Phineas Ellis and served in the Royal Sussex Regiment.
Henry and Phineas are both listed as living in Crowle in the 1841 census and possibly were already living in Oswald House – although this is not definitive.

Both described themselves as Surgeons and were effectively the GPs for Crowle.

In the 1861 Census – Henry and his Family appear to be living in Oswald House, whilst Phineas and his family are living in The Hall.

In the 1871 Census it would appear that Henry and his Family are living in the Hall – Phineas and hs family appear to have moved to a house near the market place.

By the time of the 1881 Census Henry William and his family had moved to the Manor House in Crowle.

Henry is listed as the Medical Officer of Crowle District, Thorne Union of the 1885 Kelly’s directory.

In the 1871 Census the residents are shown as Sarah Cundall and her grand-children. She was the mother of Mary Cundall, whose first two hisbands William Bogue and Robert Brunyee died leaving young children.
Mary Cundall married her third husband Frederick Burland on the 1st April 1871 in Machester and the Census survey was caried out on the 2nd April 1871.

In 1877 Sarah Ann Maw put all her Crowle Properties up for Auction.
Oswald House was purchased by Frederick Sales, a butcher with a shop in the market place. He continued to rent the property to the Burlands. 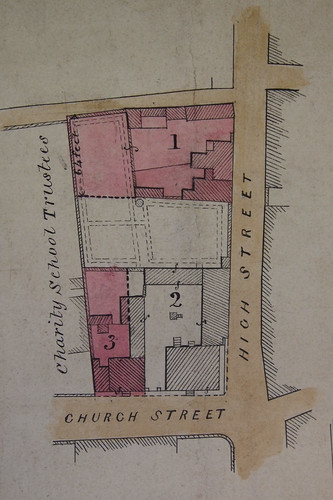 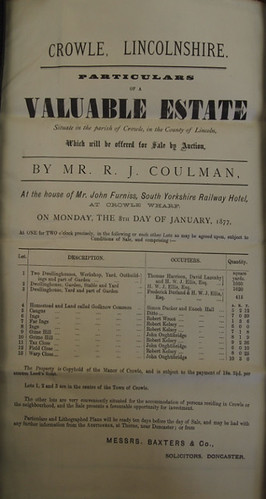 In 1893 Oswald House was sold on the death of Frederick Sales.
It was bought by Thomas Johnson Cranidge,

Thomas Johnson Cranidge – was the Brewery Manger at the Isle of Axholme Brewery on Brewery Road.

In 1933 Oswald house passed to Thomas R Cranidge on the death of his father Thomas Johnson Cranidge – Thomas had followed his father into the Brwery business.

He and his wife lived at Northfield House on Eastoft Road and rented the the property out.

Dates are unclear but tenants included Mrs Alexander the mother of their daughter’s husband, Mr Alexander, senior had been a doctor in Crowle for many years and worked out of the house near Pinfo;d Corner.

Another tenant was Mr Clark, who was Head Teacher of the school next year..
On the death of Thomas R Cranidge the house was left to his wife Anne Kate Cranidge. Anne Cranidge was a local councillor and Cranidge Close is named in her honour.

On Anne Kate Cranidge’s death in 1977 the house was left to her daughter and sold on open market.

On Anne Kate Cranidge’s death in 1977 the house was left to her daughter and sold on open market.
It was bought by Ian Tongue

The house was sold to John Rigby

The house was sold to Mr & Mrs Johnson

The house was sold to Ron & Kate Stewart